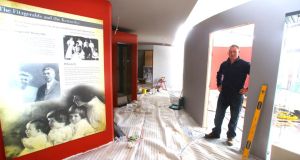 The sound of workmen hard at it can be heard in New Ross as the Co Wexford port town makes a frantic effort to ensure everything is just as it should be this day next week.

Down by the quay, angle grinders are slicing through granite paving flags; a generator engine gives a surge as more power is demanded. There’s hammering, sweeping and drilling and it’s much the same at the old Kennedy family homestead, out the Rosslare Road in Dunganstown. The Kennedy Homecoming, one of the more prominent of this year’s Gathering events, promises to be quite an occasion.

One week from today, some 30 members of the Kennedy clan, headed by Caroline, Jacqueline and JFK’s only surviving child, and Jean Kennedy Smith, JFK’s sister and former US ambassador to Ireland, plus a host of Kennedy cousins, children and grandchildren, will come to New Ross to commemorate the 50th anniversary of the president’s visit there in 1963.

Pat Kennedy, a third cousin of JFK and the last direct male descendant of the Patrick Kennedy who left Ireland in the 1840s, pulls a large photograph from a tube and unfurls it. It shows a crowd of perhaps 20 people standing in the homestead farmyard in 1963 around a smiling JFK, great grandson of the emigrant Patrick who founded the dynasty in Boston.

“He’s gone,” says Pat pointing to one of the figures and then the others, one by one, “he’s gone, him too, and her. She’s gone as well.”

By Pat’s estimate, almost everyone in the photograph has long since died, not least, of course, the president himself. But Pat is still here at the homestead, a fine mop of hair on his 71-year-old head, just as there was on the head of the smiling 21-year-old there in 1963 to greet the president.

Clan
And he’ll be there next Saturday when the clan come to call, along with Taoiseach Enda Kenny and a host of local and national dignitaries, to officially open the Kennedy Homestead Visitor Centre. Two children will unveil a bust of their grandfather, the late senator Ted Kennedy, in whose memory the impressive exhibition building is nearing completion.

Pat Grennan, a third cousin once removed to JFK, owns the homestead (which is also a working farm) and will be curator of the centre. It will be run by the JFK Trust, which also runs the Dunbrody emigrant ship at the quay with its own visitor and exhibition centre.

Workmen haul plasterboard into the exhibition centre, crunching over sheets of plastic and sawdust and tools strewn about the place. “A few long nights will do it,” one of them quips optimistically as he looks to Saturday’s deadline.

But even in its half-finished state, what is visible looks good. The building is stone-clad on the outside and inside, there’s lots of wood and a semi-polished black limestone wall in the reception. Other walls are whitewashed and one side is made entirely of smoked-glass, overlooking a pretty bed of grass plants and foxgloves.

The rectangular space, designed by Jack Harrison of the OPW, will tell the story of emigration and the Kennedy family through attractively designed and engaging display panels of photographs, text and quotations.

The centre will have plenty of audiovisual material telling the story of Joe and Rose Fitzgerald Kennedy’s extraordinary children and their impact on the world.

Poignancy
The lump-in-the-throat poignancy of that story is writ large in the final display, which shows part of the undelivered speech JFK was to make that day in Dallas, plus his commander-in-chief’s dog tags and the rosary beads he had in his pocket when he was shot dead.

On Tuesday next, an Irish Defence Forces colour party will light a torch at the Kennedy grave in Arlington Cemetery in Virginia. From there, they will take the flame by road to New York. An Aer Lingus aircraft will then fly it to Dublin. At the airport, the Naval Service will take over, ferrying the flame down the coast to the southeast on board the LE Orla.

As it nears New Ross, Jean Kennedy Smith will board the ship and, when it has docked at New Ross at 6pm next Saturday, she will carry the flame on to the quayside and give it to the Taoiseach.

Kenny will give it to three Special Olympians, who will carry it along a new boardwalk and light an eternal flame at the Dunbrody Famine ship centre.

“He told us in 1963 that he’d be back in the springtime. . . Well, instead of that, a bit like Mary Robinson’s light in the Áras window, our eternal flame here in New Ross can be an inspiration to all emigrants to come home.”