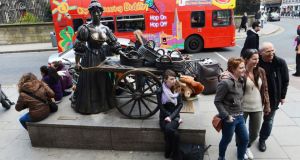 
Dublin’s most famous street trader could find herself wheeling her wheelbarrow to a new home surrounded by her modern day counterparts, if a proposal by Dublin city councillors is successful.

Fianna Fáil’s Mary Fitzpatrick and Independent councillor Nial Ring want the Molly Malone statue relocated from the bottom of Grafton Street to what they say is her “spiritual home” among the traders of Moore Street.

The councillors, who both represent the north side of the city, plan to table a motion seeking the support of their fellow councillors for the proposal.

The statue is among a number which must be moved to make way for the construction of the cross-city Luas, line BXD, which will connect the existing Green and Red lines. Enabling works for the line are due to start this year, with the first passenger services to begin in 2017.

A spokeswoman for the council said it was likely the Molly Malone statue would have to be removed from its current location by the end of this year. The Railway Order, which is the permission granted by An Bord Pleanála for the line, provides for the statue to be removed from its current location and “placed in storage” for the duration of the works.

“Dublin City Council and the Railway Procurement Agency will agree on what action to take with regard to the Molly Malone statue,” she said.

It was the intention that the statue would be reinstated in the Grafton Street area, at or close to its current location, but she said councillors would be consulted in relation to any decision.

Moore Street was a much more appropriate location for the Molly Malone statue than Grafton Street, Mr Ring said.

“There is no doubt that, given the long association and history of street trading in Moore Street and the surrounding areas, the Molly Malone Statute is a most appropriate symbol of the rich street trading heritage and Molly should come home.”

The move should not just be for the duration of the works, but should be made permanent, he said.


Luas works
“The Molly Malone statute has to be moved to facilitate the upcoming Luas and Grafton Street precinct works and there is no better place for Molly than Moore Street.”

The councillors will table a motion for their plan at the next meeting of the council’s central area committee next month.