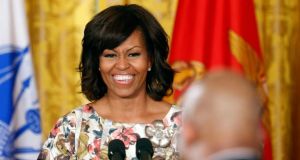 U.S. first lady Michelle Obama smiles at a U.S. military veteran during an event promoting the hiring of veterans and military spouses in the East Room of the White House in Washington, April 30, 2013. REUTERS/Larry Downing (UNITED STATES - Tags: POLITICS MILITARY) Michelle Obama and her daughters are likely to visit the Republic during the G8 meeting in Fermanagh in June


Plans are being made for an overnight visit to the Republic by US first lady Michelle Obama and her daughters, Malia and Sasha, next month around the time President Barack Obama attends the G8 summit of world leaders in Northern Ireland.

Mr Obama will be participating in the high-level summit at Lough Erne Resort in Co Fermanagh on June 17th and 18th. He told Taoiseach Enda Kenny during their St Patrick’s Day meeting in Washington that he was unlikely to visit the Republic on the trip due to other commitments, Mr Kenny said.

A visit by Mrs Obama and her daughters, which would mark a first visit to Ireland for the girls, is being organised, though the trip has yet to be officially confirmed. A spokeswoman for the first lady’s office had no comment to make.

US officials have been instructed to plan a trip and an advance team, which is likely to include secret service agents, is expected in Dublin this month to make arrangements for the first lady’s visit.

Mrs Obama is said to be keen to bring her children to Ireland after she accompanied her husband on his presidential visit here in May 2011 when he travelled to Moneygall in Co Offaly, the birthplace of his ancestor Falmouth Kearney. His visit brought Dublin city centre to a standstill as more than 50,000 people heard the president speak in front of the old parliament building on College Green.


‘Standing invitation’
Following his meeting with Mr Obama at the White House in March, the Taoiseach said that there was a “standing invitation” for the president, the first lady and their family to visit Ireland “whenever is appropriate and convenient”.

Mr Kenny said during the trip that vice-president Joe Biden, whose ancestors hail from Co Louth and Co Mayo, would be visiting Ireland later this year and he hoped they could play a round of golf during his trip.