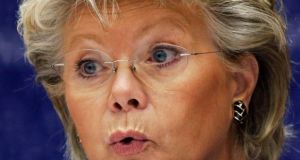 The mutual recognition of protection measures in civil matters will ensure that a protection order, such as a barring order for domestic violence, can be enforced if a victim moves from one European Union member state to another.

The agreement with the European Parliament was confirmed at the second day of a meeting of justice and home affairs ministers in Brussels, chaired by Minister for Justice Alan Shatter.

Noting that agreement on the regulation coincided with International Women’s Day, Mr Shatter said the agreement sent a strong signal that crime, particular gender-based violence and intimidation, is unacceptable.

“This is a regulation of exceptional importance to the lives of women, in particular, who are more frequently victims of domestic violence,” he said following the meeting. “They will now be able to rely on protection measures obtained from a national authority when they travel to other member states.”

The new legislation effectively means that an Irish person who has been granted a barring order will continue to have that protection when in other EU states, either for work or on holiday.

At the moment, each member state applies its own laws regarding online privacy, with different sanctions. The laws, which would have major implications for companies such as Google and Facebook, would see fines of up to 2 per cent of turnover imposed.

However, there have been concerns that the new legislation could place onerous obligations on businesses, particularly in the SME sector.

Justice commissioner Viviane Reding said yesterday that focus was now on a “risk-based approach” to the legislation, whereby a small business would have different data protection obligations than a financial services company handling a large amount of sensitive personal data.

While the European Council is not expected to reach agreement until June, most countries are in favour of introducing a regulation rather than a directive.