Colin Callanan, who was living in Australia, drowns in Koh Tao 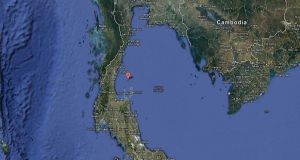 Colin Callanan (29) from Innishannon, Co Cork, drowned in an accident off the island of Koh Tao in the Gulf of Thailand last Friday. Photograph: Google Maps

A 29-year-old Irishman who was living in Australia has died while diving off the coast of Thailand .

Colin Callanan from Innishannon, Co Cork, drowned off the island of Koh Tao in the Gulf of Thailand last Friday.

Mr Callanan, a father of one, was on a work trip on behalf of the Perth company AMS Service and Maintenance when he lost his life while diving in his free time.

Mr Callanan was hired by the air conditioning company three years ago. He previously undertook an apprenticeship as a fitter and turner having been based in Perth for the last six years. Prior to leaving Ireland he was employed at Eli Lilli in Cork.

Mr Callanan’s body has been recovered and the Department of Foreign Affairs is providing consular assistance to his family. He is survived by his six-year-old son Lee, who lives in Ireland, and by his mother Marie, father Donal, brothers Keith and Simon, and sisters Sarah and Julie.