500 people from Limerick had their trip to shrine cancelled 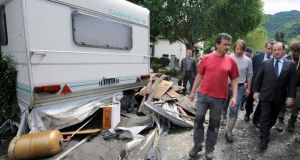 Flooding in the Catholic pilgrimage site at Lourdes this week has left people “devastated” as pilgrims still in the area are trying to make the best of the situation.

Heavy flooding in southwestern France killed three people and forced the closure of the shrine at Lourdes, less than a year after flash floods caused millions of euros of damage to the site

Hundreds of pilgrims were forced to flee the area and a group of about 500 pilgrims from Limerick had their trip to the site cancelled.

However, some Irish people have stayed in places less affected by the floodwaters.

Niall Glynn from Marian Pilgrimages said they didn’t have to cancel any of their tours because of where the hotels were. “The three hotels that we’re using are fine; they’re a little higher than other ones so they’re not as affected.”

Although none of their pilgrims opted to go home early, their trip has been significantly affected.

“Everything’s just a mess,” said Mary Kelly, a pilgrim from Dublin who chose to remain in Lourdes. Her trip was scheduled for five days and she is due back tomorrow.

Ms Kelly said the electricity went out in her hotel from about 10pm last night until this morning. “It was very frightening but we made the best of it,” she said. “People are devastated. Some of the hotels are destroyed; the bridge is nearly washed away. It’s just terribly sad.”

Ms Kelly said that while they could not go down to the grotto or do a lot of what was planned, they are safe and consider themselves very lucky. “People are trying to pull together but we are going home. For the people, here it’s sad.”

In a statement issued by the Limerick Diocese, Canon Donal McNamara, Lourdes Pilgrimage Director said: “With the safety and comfort of our pilgrims and volunteers in mind, as regrettable as it is, we were left with no decision but to cancel the pilgrimage.”

All pilgrims will receive a full refund on any monies they have already committed to the trip.