Irish cameraman hurt after being shot by Israeli soldier

Galway man claims he was deliberately targeted by military 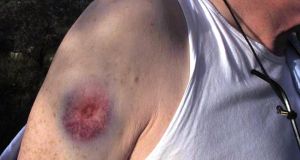 A handout photo issued by the Ireland Palestine Solidarity Campaign of Tommy Donnellan, shot while filming in Palestine. Photograph via PA


An Irish cameraman was shot in the arm earlier today by the Israeli military while filming a protest in the Palestinian village of Nabi Saleh in the occupied West Bank.

Tommy Donnellan from Galway, who travelled to the West Bank last month, said he sustained a wound from a rubber-coated steel bullet which punctured his upper right arm.

Mr Donnellan said he had been filming the protest when he was shot in the arm by an Israeli soldier almost 40ft away. Nabi Saleh is a village with a population of 550, 20km northwest of Ramallah in the Israeli-occupied West Bank.

“I think I was deliberately targeted as a journalist, as my video camera was plainly visible and there was no stone-throwing going on anywhere near me. After being hit I remonstrated with the soldier who fired on me. He then went back down on to his knee adopting a firing position; luckily I was able to run to the cover of a nearby wall.”

Mr Donnellan said Palestinians were injured by these bullets “almost every day” and many had been killed by “so called non-lethal weapons”.

A spokesman for the Department of Foreign Affairs said the Irish Embassy in Tel Aviv had been in contact with Mr Donnellan to see if he required any consular assistance.