Some 85,000 overseas visitors expected to honour life and work of the poet 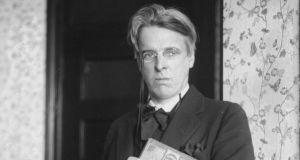 A year-long celebration of the life and works of the poet WB Yeats gets underway this evening with a poetry reading in Sligo’s oldest bar. Photograph: George Grantham Bain Collection/Library of Congress.

A year-long celebration of the life and works of the poet WB Yeats gets underway this evening with a poetry reading in Sligo’s oldest bar.

Senator Susan O’Keeffe will read from one of Yeats’ poems in Hargadon’s. The pub will host a reading of Yeats’ poems at lunchtime every day this year to mark the 150th anniversary of his birth.

Ms O’Keeffe is the chair of Yeats150 which has organised a year-long programme of events.

Next Monday, January 5th, a musical event will take place in the house in 5 Sandymount Avenue where Yeats was born. It will mark the Harp Festival of Moons.

The highlight of the year will be Yeats Day on June 13th which will be 150 years to the day since the poet’s birth in 1865.

This will be marked by a four day celebration both in Ireland and abroad. The Irish, Scottish and English poet laureates will be speaking at a number of events.

Symposiums will be held in London and in Italy to mark the anniversary.

On Yeats Day 2015 the State Library in Victoria, Australia, will hold a number of events to mark the centenary.

There will be an extended Yeats summer school this year and a programme of events at the National Library.

Yeats’ association with many points on the Wild Atlantic Way will also be celbrated.

Ms O’Keeffe, who is from Sligo, said it is hoped to invite as many people as possible to the year long celebration.

Ms O’Keeffe said: “Yeats himself founded a poetry club called the Rhymers Club in a pub call the Cheshire Cheese Pub in London so it seems fitting to start this exciting year of celebration with poetry in the pub.

“Already there are a huge number of events planned. Our National Cultural Institutions, including the National Library, National Gallery and The Abbey Theatre are all programming Yeats themed exhibitions and events in 2015,” she said.

“Visitors wishing to walk in Yeats’ shoes will be encouraged to visit places like Innisfree, the Sally Gardens, BenBulben Mountain, Coole Park and Thoor Ballylee.”

The organisers behind Yeats 2015 expect to attract 85,000 extra visitors to Ireland, and hope it will generate renewed interest in Irish culture and literature.

Yeats 2015 is part of the decade of commemoration and is partially funded by the Government.