Yacht at centre of €290m smuggling plot up for auction 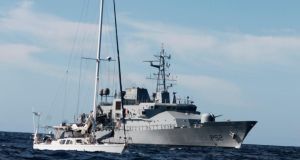 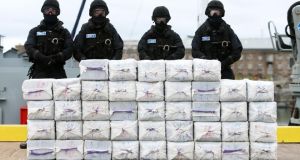 Members of the Irish navy standing behind the haul of cocaine seized from the yacht Makayabella in September 2014. Photograph: PA

A yacht at the centre of one of Ireland’s biggest ever drugs seizure is due to go for auction later this year and could fetch up to €100,000, according to the auctioneer handling the sale.

Cork auctioneer Dominic Daly said the 62 feet-long Makayabella, which was built in 1986, is already attracting interest both nationally and internationally.

“I would expect her to fetch a figure in the region of €100,000,” said Mr Daly who has been appointed by the state to handle the sale of the French designed aluminium-hulled cutter.

The Makayabella made headlines last September when she was seized by a boarding party from the LE Niamh after they found 1,025 kgs of cocaine worth €290 million on board.

The seizure off the Cork coast, one of the biggest in the history of the Irish state, was as a result of a Joint Task Force operation involving the Naval Service, Customs and the gardaí.

Five years ago, Mr Daly auctioned off the catamaran Lucky Day which was seized with €440 millon worth of cocaine on board and was sold to a buyer from Co Donegal for €58,000.

The three were part of a Yorkshire based gang who were planning to smuggle the drugs into the UK and the National Crime Agency in the UK liaised closely with gardaí to foil the plan.

Powell’s son, Stephen from Guisely in West Yorkshire, who masterminded the drug smuggling plot is currently serving 16 years in jail in the UK for his part in the operation.

It was Stephen Powell (48) who sourced and bought the Mayakabella for €140,000 in 2013 from her previous owners who were using her as a charter yacht in the Caribbean.

Earlier this week, the NCA in the UK confirmed that another Briton, James Andrew Hill (30), has been charged with attempting to import cocaine into the UK on board the Makayabella.

Hill from Ilkley in Yorkshire – who is the fifth person to be charged in the UK in connection the Makayabella smuggling operation – has been remanded in custody until July 15th.