Tom Hennigan reports from Rio as Pat Hickey's condition in hospital puts a delay on any further action by Braziliian police. Meanwhile attentions turn to the US swimmers and their allegations of robbery. 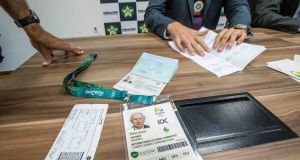 The world’s media has responded to Pat Hickey’s arrest as “a hugely embarrassing development” for the International Olympic Committee with detailed reporting of the former black-belt judoka’s ‘fall from grace’.

The Guardian reported that Mr Hickey’s arrest was “a hugely embarrassing development” for the International Olympic Committee (IOC) and that the incident echoed “the raids on the Baur au Lac hotel in Switzerland that presaged the downfall of Fifa” and a similar ticketing operation during the 2014 World Cup.

The newspaper added that Mr Hickey, “a former black-belt judoka”, had been involved in several controversies including “his obsession with launching the inaugural European Games in Baku last year, which were criticised by human rights organisations”.

The BBC reported on Thursday that Mr Hickey’s scheme could have had profits of 10m reals (€2.7m) and said the 71-year-old would be replaced as president of the European Olympic Committees by his deputy Janez Kocijancic.

The BBC also reported that Fine Gael’s Noel Rock told the news agency that Mr Hickey had “stonewalled” questions asked of him by the Minister for Sport Shane Ross.

“He refused to answer straightforward, basic questions which were perfectly reasonable for the minister, who after all is responsible for the funding of the Olympic Council [of Ireland]to be asking of him,” Mr Rock is quoted as saying.

“He also refused to have any kind of independent presence into any inquiry that may have taken place into the Olympic Council, into its corporate governance and into its commercial dealings, and that simply isn’t good enough.”

The New York Times also reported the arrest alongside a photo of Mr Hickey at a boxing medal ceremony during the 2015 European Games in Baku, Azerbaijan, while CNN posted a short profile on the former OCI president entitled “who is Pat Hickey?” It writes that the former judo pro criticised calls ahead of the Olympics for an outright ban of all Russian athletes competing in Rio.

Reuters posted the video of Mr Hickey’s arrest on Wednesday after he tried to hide from Brazilian police when they arrived at the Hotel Windsor Marapendi and cited the Olympic Council of Ireland statement that Mr Hickey had decided to step aside temporarily as president.

TheAustralian.com ran with the headline ’IOC blushes over arrest of Ireland’s Hickey in scalping scandal’, while The West Australian opens with ‘European Olympics chief’s sharp fall from grace’.

The Sydney Morning Herald reports that the news of Mr Hickey’s arrest was broken by journalist Jamil Chade who said the IOC withdrew his accreditation to have access to the hotel where Mr Hickey was staying. The IOC later said the withdrawal was a “mistake”.

AFP reflects on Pat Hickey’s “lavish” 70th birthday celebrations at the European Games in Baku last year. It cites Mr Hickey as saying “I’m on top of the world” at his birthday bash in Azerbaijan where he was pictured with Russian president Vladamir Putin at the Games opening ceremony.

The news agency writes that Mr Hickey “could not be more different” to his IOC predecessor Lord Michael Killanin who was decorated for his role in the D-Day landings in the second world war and was IOC president from 1972-1980.

“Where Killanin used gentlemanly bonhomie, in the era before the IOC was transformed into a multi-billion dollar commercial organisation, Hickey grafted away, skilfully manoeuvring himself into influential positions in the sports hierarchy,” writes AFP. It adds that Mr Hickey never adopted to the champagne lifestyle some IOC members enjoy and that he tracked down an Irish pub in remote Guatemala during the IOC meeting to choose Sochi as host for the 2014 Winter Olympics “preferring pints of Guinness to the stiff and formal IOC reception”.

The AFP cites a friend of Mr Hickey’s as saying “Pat has natural charm and the gift of the gab. However, those who have as he sees it crossed him or challenged him have been dealt with ruthlessly”.