Workers could be forced to join ‘company unions’, Unite claims 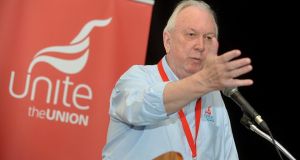 Workers could be forced to negotiate with their employers through what would essentially be internal “company unions” under planned Government reforms, the trade union Unite has claimed.

He said rather the Government’s planned legislation provided remedies for workers who did not have access to collective bargaining with their employer.

“These proposals do not vindicate the right of workers to negotiate collectively through a body of their choice.

“Not only do the Government’s proposals not provide for collective bargaining - Unite is also extremely concerned that the proposed legislation will retain the position of ‘excepted bodies’. In effect, this means that companies may choose to negotiate with their employees through an employer-sponsored association.

“This could result in workers being forced to negotiate with their employers through what would essentially be company unions - the kind of bodies which long been outlawed as an unfair labour practice in Canada and the United States, and are regarded by the International Labour Organisation as an interference with freedom of association.”

Mr Kelly said collective bargaining was a a basic workers’ right and a human right.

He told delegates that public service workers must share in the fruits of economic recovery - “through pay restoration, abolition of the pension levy and a flat rate increase to benefit low- paid public sector workers”.

He said low pay was an issue in the public sector, as it was in the private sector.

Mr Kelly said the pensioners at Waterford Crystal would shortly receive their entitlements following a landmark judgement in the European Court -- and a subsequent settlement -- in a lengthy legal case taken by Unite.

Mr Kelly said austerity was not an accident but rather was a political choice and was not a cure for economic ills.

“In the Republic, over the past few weeks, young people have been blackmailed by the Government into taking out private health insurance to avoid higher levies for those over 35 - a policy decision which benefits nobody except private health insurers, and which ensures that the ideal of universal healthcare free at the point of delivery is further away than ever.”

“In Northern Ireland, Unite members in the ambulance service have just finished a one day strike, and other health members a two week work-to-rule, to demand a mere one percent pay increase.”