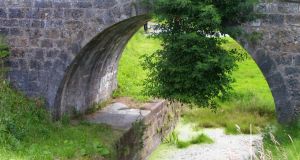 Part of the Ulster Canal, a 93km cross-Border, derelict waterway

Work has been delayed on the first stage of the reopening of the Ulster Canal - a 93km cross-Border, derelict waterway running from lower Lough Erne in south Fermanagh, across Cavan and Monaghan and into Armagh.

Government approval to restore a 2.5km stretch of the Ulster Canal from the Shannon-Erne Waterway to the International Scout Centre at Castle Saunderson, Co Cavan, was granted in February 2015.

The project is being undertaken by Waterways Ireland. It was previously announced that the navigation from Lough Erne to Castle Saunderson would be complete by April 2016.

However, Minister for Arts Heritage and the Gaeltacht Heather Humphreys said “contractual issues” had arisen in relation to the dredging of a stretch of the River Finn and as a result “completion of this phase has been delayed”.

Neither the Minister’s department nor Waterways Ireland would clarify whether work has stopped on the project.

The Department told The Irish Times it had been “informed by Waterways Ireland that efforts to resolve the contractual issues are continuing”.

Once these matters are resolved, the next element of the project, the construction of a new bridge and canal section would get underway, the Department said.

Waterways Ireland declined to comment on whether work had stopped, citing the “contractural issues”.

Originally opened in 1841, it was the last major waterway built in Ireland, and it is now the last such waterway remaining unrestored.

Following the restoration of the Shannon Erne Waterway in the 1990s, navigation is possible from Limerick or Dublin via Shannon and Erne waterways into Northern Ireland and to the Fermanagh-Donegal border at Belleek.

The Ulster canal would extend the navigation from the Shannon-Erne Waterway to Lough Neagh and down the Bann river to the north Antrim coast.

In 2007, the North South Ministerial Council approved in principle the reopening of the south eastern Lough Erne to Clones section of the canal.