Winning the Seanad referendum could damage Kenny more than losing it

Opinion: A house condemned to abolition could spell trouble for the Government 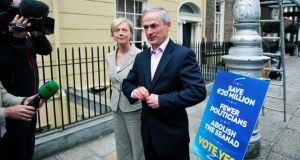 Losing the referendum on the Seanad would be a blow to Enda Kenny’s authority but winning it could do him more damage and even shorten the Government’s life.

By ploughing ahead with the commitment to hold the referendum with just half its term of office completed, the Coalition has blithely ignored the political consequences of its actions.

Nobody in Government appears to have thought about how members of the Seanad are likely to behave if the electorate does what it is asked and votes for abolition on October 4th.

It is no surprise that virtually all Fine Gael and Labour Senators want to see the proposal defeated. More significantly, several Senators in both Government parties deeply resent the timing of the poll, which is going to leave them in the position of being political zombies for the next two years if the proposal is carried.

In that situation the only way for them to demonstrate their political relevance will be to vote against the Government when they do not agree with its policies. They will have nothing to lose by doing so.

Judging legislation on merit
“We have been treated with great disrespect by Kenny and Gilmore and as far as I am concerned I will be judging legislation on its merits and will be voting against if I feel that is the right thing to do,” said one Labour Senator this week.

That means the Coalition risks defeats in the Seanad during the remainder of its term. The Upper House cannot vote down the budget but it could reject some of the ancillary measures, like the Social Welfare Bill.

A rejection by the Seanad means that legislation can be delayed for 90 days until it is passed again by the Dáil. That will be an unnecessary nuisance for the Government but, more importantly, it will introduce an element of political instability at a critical period in its life.

Labour is finding the going much tougher than Fine Gael and it will be no surprise if some of the Labour Senators break into open rebellion. The Coalition is already in a minority in the Seanad so the defection of two or three Labour Senators could tip the balance against it on major issues.

Disaffection in the Seanad ranks could then spread to TDs, particularly if the local and European elections next June turn into a rout for the party. That would have implications for Gilmore’s leadership and stability of the Coalition.

All in all a Yes vote in the referendum could turn into a pyrrhic victory for the Government and bring the general election forward by up to a year from the planned date of early spring 2016.

The nature of the Government campaign has also alienated TDs and Senators of both parties. The crude poster calling on voters to cut the number of politicians and save €20 million a year in the process has touched raw nerves in Leinster House.

“This is populist nonsense at its worst,” said one Fine Gael TD. “We of all parties should not be indulging in this ignorant politician-bashing, which is clearly based on focus group research. I thought we were above that.”

On a more practical note, a glaring weakness in the Government campaign is that the Dáil reform measures that will kick into place if the Seanad is abolished have still not been published.

If the Government is serious about giving Dáil committees additional powers to compensate for the Seanad’s abolition, why has it not produced detailed reform plans with just four weeks left to polling?

On the other side of the debate the No campaign appears to be gaining momentum, with middle-class voters in particular becoming uneasy at the prospect of abolition. Opinion polls and public debates indicate that opposition to the proposal is growing.

However, the notion that some kind of reformed Seanad is a realistic alternative to abolition is not credible either. For a start voters will be asked to give a simple Yes or No answer to abolishing the House as it stands.

Another referendum
If people vote No, the Seanad in its current form will almost certainly be retained as it would require another poll to have a reformed House without university seats. The prospect of another referendum in the next two years is remote.

It would be possible to widen the franchise of the electorate of the non-university seats without a referendum, as Senators Fergal Quinn and Katherine Zappone have proposed, but their scheme has not met with universal approval.

It is no accident that more than 10 reports on Seanad reform have been ignored by successive governments. While the Upper House has obvious shortcomings, so do the alternatives.

Having a directly-elected Seanad would create the danger of direct clash with the Dáil while a body that was merely a talking shop would serve no great purpose.

The choice facing the people is to abolish or retain the Seanad as we know it.