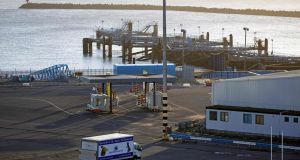 A file image of Port of Ramsgate in the south east England. Seaborne was awarded a €15. 7m contract to run ferries from Ramsgate to Ostend in Belgium. The company has no ships. Photograph: AFP

An Irish shipping business that the UK government claimed pulled support from a company contracted to provide ferries in the event of a no-deal Brexit had “no contractual agreement” with the firm, a well-placed source has said.

The British Department of Transport said it had decided to cancel a contract with Seaborne Freight to provide additional ferries across the English Channel to ease post-Brexit pressure on Dover after Arklow Shipping, which it described as the company’s “backer”, decided to “step back from the deal.”

The awarding of the £13.8 million (€15.7 million) contract to Seaborne to run ferries from Ramsgate in England to Ostend in Belgium caused a storm of controversy when it emerged that the company had no ships and that the terms and conditions on its website appeared borrowed from a food delivery firm.

The Co Wicklow firm declined to comment on the department’s statement when contacted by The Irish Times. However, a source close to the firm said that while it had discussions with Seaborne about providing ships, it was never “a backer” or had “any formal agreement” with Seaborne, nor was it “a contract partner.”

Arklow Shipping, a long-established shipping business owned by the Tyrell family, “stepped away” from further talks with Seaborne “for commercial reasons,” said a source with knowledge of the firm’s dealings with Seaborne.

Arklow Shipping owns and operates a fleet of 55 dry bulk vessels from two bases, its home base in Co Wicklow and Rotterdam in the Netherlands.

The company’s managing director James A Tyrell wrote to UK transport secretary Chris Grayling last month, saying the firm had talks with Seaborne over the previous 12 months. He said it intended to finance the purchase two vessels to operate a route between Ramsgate and Ostend and to buy a stake in Seaborne.

The letter, sent by Mr Tyrell to Mr Grayling on January 18th, was published on social media on Saturday after the UK department released its statement.

“I consider that Seaborne’s plans to deliver a new service to facilitate trade following from the UK’s departure from the EU are both viable and deliverable,” Mr Tyrell told the British secretary in his letter.

“I will be working closely with the team at Seaborne to ensure that they have appropriate support from Arklow Shipping to deliver on their commitments to Her Majesty’s Government.”

The source with knowledge of Arklow’s dealings said that it had “numerous discussions” with Seaborne but that the firm “never came to any formal agreement.”

It was now “puzzled and a bit annoyed” for being blamed for the cancellation of the contract and believed the matter had been “blown out of proportion,” the source said.

The company is also said to have reacted with surprise at pro-Brexit Conservative MP Jacob Rees-Mogg questioning whether the Irish Government encouraged the Wicklow firm to withdraw its support.

Minister of State for European Affairs Helen McEntee said over the weekend there was “absolutely no truth” to Mr Rees-Mogg’s claim.

Arklow Shipping has had no contact with the Government, said the source.

The cancellation of the contract has led to calls from both Conservative and Labour MP for Mr Grayling to step down as transport secretary amid increasing concern within British business community that the UK is not prepared for a no-deal scenario with 46 days until Britain is due to leave the EU.