‘What planet are you living on?’ Elton John asks DUP member

Appearing on the Victoria Derbyshire programme, Sir Elton John has hit out at DUP politician Trevor Clarke for his comments about the HIV virus. Video: BBC 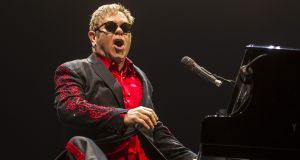 Singer-songwriter and composer Sir Elton John has expressed dismay at comment about HIV made by a member of the DUP. Photograph: Getty

Sir Elton John has expressed dismay at comments made by a Northern Irish politician about HIV.

On Tuesday, Democratic Unionist Trevor Clarke said he did not know heterosexual people could contract the virus until the facts were explained by a charity last year.

Sir Elton, who is due to play a gig in Belfast on Friday, said: “What planet are you on?”

During an appearance on the Victoria Derbyshire programme, Sir Elton agreed that many 1980s misconceptions about HIV still exist.

When asked to remark on a survey that found a third of people in the UK believed HIV could be contracted through sharing a toothbrush, the singer replied: “I’m not surprised.

“A Northern Ireland politician said the other day he didn’t know that heterosexual people could get Aids, or HIV.

Sir Elton, whose Aids Foundation, funds testing programmes across the world, did not refer to Mr Clarke by name.

His husband David Furnish said there was still a lot of work to do to address the stigma associated with an HIV diagnosis.

“It shows in the fight against this disease we can make fantastic medical advances; we can make great gains but stigma is a much more difficult thing to shift,” he said.

On Tuesday, Mr Clarke disclosed that he had been “ignorant” about the facts of HIV until he met with a senior figure from Positive Life, an organisation working to help those living with the virus.

The DUP MLA, who represents the rural South Antrim constituency said: “I have to put on record my thanks to Jacquie Richardson from Positive Life. Meeting her for the first time was a turning point for me, having been ignorant of the fact that the disease also affects heterosexual people.”

The remarks were made during a debate in the Northern Ireland Assembly calling for the launch of a new HIV awareness campaign.

It was the first substantive debate on the issue ever held at Stormont.

During the same discussion, another DUP MLA Paula Bradley revealed that “someone she loves” had been diagnosed with HIV a decade ago.