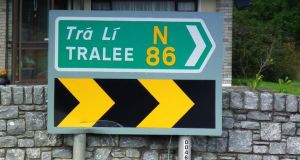 Tralee, the county town of Kerry, is set to seek city status.

A motion by the mayor of the town is being put before the Municipal District of Tralee meeting on Monday and is likely to get widespread support.

Fianna Fáil councillor Thomas McEllistrim said city status for Tralee was one of his priorities when elected as mayor.

“On population grounds alone, why shouldn’t Tralee be designated a city when Kilkenny is?” he asked.

“The population of Kilkenny is at 23,000 – that of Tralee at the last census was 22,200. It would make a big difference to Tralee from a tourism point of view. People tend to go to cities.”

However, according to a spokesman for the Department of the Environment and Local Government, the move for city status would require legislation.

The various Local Government Legislative Acts have historically set out which councils are city councils and which ones are county councils.

There have been no proposals to confer city status on any other councils, the department spokesman said. “To do so would require primary legislation and that would mean a Bill would have to be introduced into the Dáil.”

Mr McEllistrim, a former TD who has been nominated to contest the Seanad elections, said it is something he intends pursuing through the Oireachtas.