Waterford Airport staff to hold strike from next week 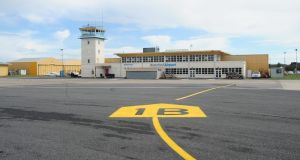 Workers at Waterford Regional Airport are to stage an indefinite strike from Wednesday of next week in a dispute over cuts to their working hours.

The Unite trade union,which represents the staff, said the row centred on a unilateral decision by management at the airport to reduce the hours of workers from 39 to 21 per week “coupled with their refusal to allow workers into their place of work to work their currently agreed rosters - a refusal tantamount to a lockout”.

The cuts followed the closure of Belgian-based carrier VLM, which operated services from Waterford Airport to Luton.

Waterford Airport acts as a base for the Irish Coast Guard’s search and rescue operations, and is used as an aircraft servicing and training facility by CHC, the Coast Guard’s operating company.

Unite regional officer Tony Kelly said: “Management can resolve this dispute immediately by reversing their unilateral decision to slash workers’ hours, allowing our members back in to work, and engaging meaningfully with Unite on a way forward for Waterford Regional Airport.”

Waterford Airport said it was “surprised and disappointed” at the announcement by Unite that its members planned to take industrial action including the placement of pickets and a full withdrawal of labour from July 20th.

It said the withdrawal of this route had led to a very significantly loss of work available at the airport.

“The airport has continued over the last number of weeks to engage with employees and their representatives as part of a number of cost-cutting measures including short-time working on an interim basis, which commenced at the start of this week,” it said.

“These necessary measures have been put in place based on current business and regulatory needs, whilst at the same time protecting the employment of all staff that remain at the airport.

“The majority of staff understand and support the airport’s decisions in these matters.In the meantime, the airport continues to search for a new airline to provide passenger services to/from Waterford, and deliver vital regional connectivity for business, tourism and leisure passengers that includes visiting families, relatives and friends.”