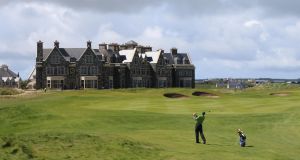 Doonbeg golf course and hotel in Co Clare: Leo Varadkar has come under fire after saying he made inquiries about a wind farm close to Donald Trump’s golf course. Photograph: Niall Carson/PA

The businessman behind a failed plan to build a wind farm near Donald Trump’s Co Clare golf resort has said he is disappointed Taoiseach Leo Varadkar “interfered” in the planning process.

Michael Clohessy, director of Clare Coastal Wind Power, said his company would be “reviewing this situation” after Mr Varadkar told an audience in Washington DC, including the US president, that he intervened on Mr Trump’s behalf regarding the wind farm planned for near Doonbeg.

The Co Clare company’s proposal to erect a nine-turbine wind farm about 4km from the golf resort was twice refused planning permission, costing the firm about €500,000.

At a Capitol Hill lunch on his St Patrick’s Day visit to the US, Mr Varadkar said that about three or four years ago, when he was minister for tourism, he received a call from Mr Trump who said he had a “problem” near Doonbeg, that somebody was trying to build a wind farm that would “impact on tourism”.

The Taoiseach said he initially thought the call was “a pisstake by one of my staff members” as he thought a businessman like Mr Trump would write a letter first to set up a meeting.

“But, as we all know, President Trump does work like that. He is a very direct man, likes to get things done,” he said.

Reacting to the Taoiseach’s remarks, Mr Clohessy said: “We at Clare Coastal Wind Power Ltd are disappointed at the admission by An Taoiseach that he interfered in the planning process regarding the planning application for our proposed wind farm in west Clare.

“We at all times acted with integrity and in good faith but it now appears that we were not on a level playing field. We will be reviewing this situation over the coming days.”

A Government spokesman said that Mr Varadkar’s called Clare County Council seeking information about the wind farm and that the call was “entirely routine” and “normal politics”.

“It was raised with him and he sought a brief on it and that was the end of the matter – full stop,” he said.

Clare County Council last night said there was no record of a representation being made by Mr Varadkar on the planning file for the wind farm. The council said it was “very unusual” to seek a brief over the phone in relation to a planning matter.

Council officials, from the current and former chief executive down to senior planners and planning officials, were contacted about the matter and none said they received a call from Mr Varadkar.

The council refused planning in October 2014 and An Bord Pleanála upheld that decision in July 2015 due to the impact the wind farm would have on fresh-water pearl mussel in the Doonbeg river.

Mr Trump tweeted his delight at the 2014 refusal: “Great news from Ireland – Clare Co Council has refused to grant permission for a massive wind farm near my hotel and golf course in Doonbeg.”

Twenty-three local landowners stood to receive dividends from the turbines on their lands.