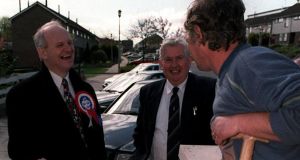 On the prospect of the Ulster Unionist Party securing the Westminster seat on Thursday week, the DUP’s Rev William McCrea says Danny Kinahan can “dream on”.

Still, South Antrim, like Upper Bann, is being mooted as a constituency where a DUP incumbent could be edged out. Whoever wins may do so by a very narrow margin.

It should be a very closely run race, particularly if Alliance supporters vote tactically for Kinahan in an effort to unseat McCrea.

The controversy over Jim Wells’s remarks making a connection between gay couples and child abuse also may have a bearing on the result.

The last time out just more than 1,100 votes won the South Antrim seat for the DUP. McCrea emerged with 33.9 per cent and Reg Empey was a close second on 30.4 per cent.

In previous years the Westminster seat was held by the UUP but McCrea, a Presbyterian minister, says that while not complacent he is confident of being re-elected. 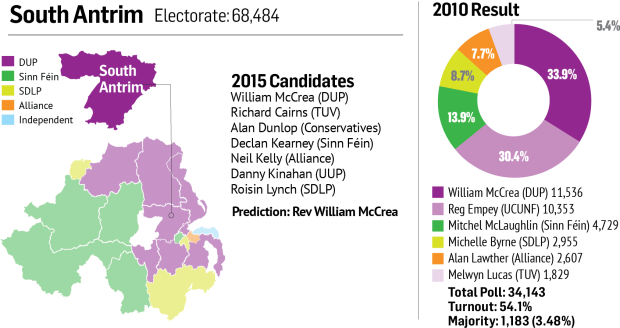 Kinahan, however, is “very hopeful” and has good reason to be optimistic.

“The doors have been very good to me and I chuckle at my friend Willie McCrea saying, ‘Dream on’. It is extremely close at the moment and we need everyone out. It is basically a choice between Dr McCrea and myself as there is no one else who can get the numbers to win.”

The UUP education spokesman, an ex-British solider and former Christie’s auctioneer recruited by former leader David Trimble, claims he offers a more progressive style of politics than his rival.

“I see McCrea as someone who holds the line, stands the line and doesn’t move, it’s sort of an old-style, hardline unionism,” he said.

“I would like to think I am progressive and can take this country further forward. I want to get to Westminster to work hard on holding the union together by working with Scotland, England and Wales.”

South Antrim is a mix of suburban and rural areas, including Ballyclare, Doagh, Newtownabbey, Randalstown and Templepatrick, where Belfast International Airport and Kinahan are based.

Kinahan (57) says the UUP’s big push will be “the economy and getting jobs for people” while McCrea says the DUP has proven “we are not in the pocket of Labour or Conservative” and will work to get “the best deal for Northern Ireland”.

McCrea (66) lives in Magherafelt in Mid-Ulster, where he was MP for 14 years until Martin McGuinness took the seat for Sinn Féin in 1997.

McCrea says he is “totally concentrating” on South Antrim, where he has been MP for a decade.

“I remember the Ulster Unionists saying the best thing for South Antrim is if McCrea could be kept off the streets and off the roads and off the doors we could win it,” he says.

“They are anxious and I am not. They will be sadly disappointed. I am on the doors, I am talking to people and believe I have a good message to tell.”