US Airways flight diverts to Shannon after navigation failure 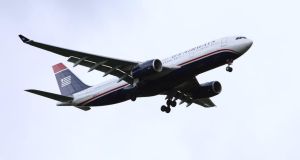 US Airways flight AWE-711 was en route from Zurich in Switzerland to Philadelphia and was about 200km west of the Clare coast when the problem was reported.

A passenger jet had to burn off thousands of litres of fuel before it could safely land at Shannon Airport yesterday after suffering a navigation systems failure that prevented it from crossing the Atlantic.

US Airways flight AWE-711 was en route from Zurich in Switzerland to Philadelphia in the US and was about 200km west of the Clare coast when the problem was reported.

At about 1.40pm the pilot contacted air traffic controllers in Shannon to inform them he had no navigation systems. It was decided the flight should be diverted and should land in Shannon.

The crew of the Boeing 767-200 turned back towards the coast where it entered a holding pattern in order to burn off excess fuel. This was to ensure it could land within safe landing weight limits.

The pilot said up to 11,000lb (5,000kg) of fuel would have to be burned before they could commence their approach to Shannon.

After spending more than an hour circling over the Atlantic, the flight landed safely at Shannon shortly before 3pm.

The flight was grounded while engineers investigated the issue. The flight was later cancelled, and the 110 passengers and crew were accommodated in hotels in Limerick and Clare last night.

They were due to return to Shannon early today to continue their journey to the US.

It was the third time this month that a US Airways flights had to divert to an Irish airport.