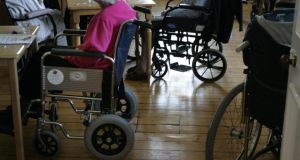 A confidential Government report showed just 10 of the 109 public nursing homes meet new standards to be enforced by the Health Information and Quality Authority in 2015.

“Massive work” costing possibly hundreds of millions of euro will be needed to upgrade State-run nursing homes , according to Minister of State with responsibility for Older People Kathleen Lynch.

However, Ms Lynch said the 100 nursing homes which do not currently meet standards will not be closed.

Her comments follow publication of a confidential Government report by The Irish Times yesterday showing that just 10 of the 109 public nursing homes meet new standards to be enforced by the Health Information and Quality Authority in 2015.

The Minister said the authority was “very reasonable” and once work had started to address the problems in older units the Government could “negotiate” with it to keep them open. “But what is essential is that people who are receiving care in these units is that they have the same standard as you would get in the private sector and that their care is delivered safely,” she told RTÉ.

Sinn Féin health spokesman Caoimhghín Ó Caoláin said the Government needed to make “firm commitments and budget allocations” to address concerns. “This Government’s preference is always to privatise healthcare and they have already allowed public nursing homes to close. That is not acceptable,” he added.

Siptu called for immediate funding for the sector. There was under investment in public care while tax breaks were given to developers to set up private nursing homes and subventions given to private operators, said Paul Bell, the union’s health division organiser.

“The issue is whether the State is prepared to continue its direct role in the provision of nursing home care or whether it prefers to allow large private sector providers to monopolise the sector,” he said.

There was an over-reliance on the for-profit sector in Ireland and “serious abuse” has been uncovered in some units, Mr Bell added. “Inquiries have confirmed that the generation of profits was placed before standards of care in these private homes,” he said.

But Nursing Homes Ireland, which represents private and voluntary nursing homes, questioned whether the State should put hundreds of million outlined in the report to upgrade old buildings.

The Government should instead invest in a public private partnership stimulus package to meet long-term residential care which would also create “thousands of sustainable jobs”, said Tadhg Daly, chief executive of Nursing Homes Ireland. “It’s now time for the State to face up to its responsibilities and support our sector in meeting the challenge of ensuring we meet the long-stay residential care requirements of our ageing population,” he said.

Age Action said the Government must publish its plans for the sector since new standards for nursing home buildings have already been in operation since 2009. “Now with the HIQA deadline just two years away for full compliance, we need to see how the State intends to meet the standards, while planning for the needs of a growing population of older popple,” said Eamon Timmins, Age Action spokesman.

Studies showed the number of nursing home beds would need to increase by almost 60 per cent before 2021 to meet needs, he added.