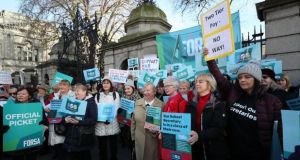 The trade union Fórsa has sanctioned a ballot for industrial action in about a dozen State-funded voluntary organisations that provide health and social services over pay restoration. Photograph: Nick Bradshaw

The trade union Fórsa has sanctioned a ballot for industrial action in about a dozen State-funded voluntary organisations that provide health and social services over pay restoration.

The trade union Siptu said “consultation meetings” for industrial action in the Cork region would commence immediately beginning with South-Doc and Co-Action.

Trade unions said following a meeting on Wednesday that a campaign of “targeted industrial action” was planned across Section 39 organisations over the pay restoration issue.

Trade unions said that the Minister for Public Expenditure Michael McGrath had declined to intervene in the dispute.

Unions argue that while Section 39 organisations were urged to cut staff pay in line with reductions in remuneration to public servants during the austerity years, Section 39 personnel had not seen pay restoration, unlike direct State employees.

More than 1,000 staff in a number of Section 39 organisations staged a 24-hour stoppage last February over pay restoration. However, the campaign was effectively suspended for a period as a result of the Covid-19 pandemic.

There are about 300 Section 39 organisations across the country which provide services on foot of grants paid by the HSE. A deal was reached two years ago for the restoration of pay in an initial 50 of these bodies.

However, a statement issued after the meeting of officials of Fórsa, Siptu and the Irish Nurses and Midwives Organisation, said there were now concerns about the process of pay restoration in some of the initial 50 Section 39 organisations.

Unions said “some of the 50 Section 39 organisations involved in the first tranche of pay restoration due on October 1st under an agreement secured by unions in 2019 have cited potential funding challenges and are now claiming an inability to honour the agreement”.

Unions said that if employers failed to meet the terms of the agreement, members “would be left with no choice but to ballot for industrial action”.

Siptu public administration and community division organiser Adrian Kane, said: “The decision of the Minister to wash his hands of this dispute not only beggars belief but has left a bitter taste in our members’ mouths.”

“These are the very same workers who made sure essential services have been maintained throughout this Covid-19 pandemic. The appetite on the ground for a sustained period of targeted industrial action can no longer be wished away by Government. . Our members are determined to see this campaign through until the end and secure a fair outcome.”

Fórsa official Catherine Keogh said union members continued to provide a range of health services to the community throughout the Covid pandemic, but that the Department of Health, the HSE and the Government had “effectively turned their backs on these workers”.