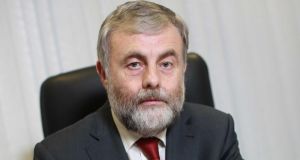 Siptu president Jack O’Connor said a Rubicon had been crossed last Thursday and the UK’s vote to leave the EU would “turbocharge Eurosceptic forces all over Europe”.

Speaking at the Government’s national economic dialogue, Mr O’Connor said it was “as plain on nose on our our faces that what prompted the vote last Thursday was the alienation of working-class people across whole swathes of the UK”.

He said this should involve a huge programme of public investment.

There should be a complete redefinition of European fiscal rules and it should also involve the provision of decent jobs and decent pay for workers, he said. It should also mean the introduction of “proactive measures to end the race to the bottom”, he said.

Ms King said Ictu believed that the triumph of the Leave campaign came as a direct consequence of the persistent pursuit of austerity policies and the erosion of social progress, which alienated workers across the continent.

“Social Europe was sacrificed to save financial Europe and there has been a resultant loss of confidence in the entire European project,” she said.

Ms King argued that European Union authorities needed “to grasp this reality and urgently develop a programme of substantial public investment together with a suite of measures to secure workers’ rights and decent jobs”.