TUI to oppose merger plans for institutes of technology 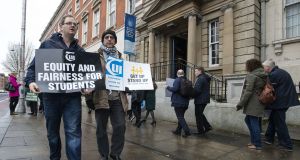 In a recent ballot members ofthe TUI voted by 85 per cent to 15 per cent in favour of industrial action up to and including strike action over the concerns at the merger proposals. Photograph: Dave Meehan

Members of the Teachers’ Unions of Ireland (TUI) working in institutes of technology around the country are to commence industrial action next week over concerns regarding potential mergers.

The union said on Wednesday that from April 4 its members will be directed not to co-operate with any activities related to the proposed mergers of institutes of technology.

The mergers of institutes of technologies were a key element of plans by the out-going Government to establish new technological universities.

TUI deputy general secretary Annette Dolan said the union’s main concerns centred on a requirement for mergers of institutes of technologies in proposed legislation as well as the protection of terms and conditions of staff and the maintenance of regional provision of courses.

In a recent ballot members of the TUI voted by 85 per cent to 15 per cent in favour of industrial action up to and including strike action over the concerns at the merger proposals.

Ms Dolan said the out-going government had sought to rush the technological universities Bill through the Oireachtas before the recent election, but did not succeed. She said with a new intake of TDs in the current Dáil, the union’s concerns may again be considered.

TUI president Gerry Quinn said: “The technological universities Bill contains significant threats to the institute of technology sector, its regional provision and the working conditions of academic staff. We will be making clear to any new government that a sustainable and manageable resolution to these grave concerns must be found.”

He said the union remained critically concerned about the potential consequences of the legislation “given the current crisis of underfunding, understaffing and precarious employment in the institutes”.

“Between 2008 and 2015, funding for the sector was cut by a massive 35 per cent or €190 million. Over the same period lecturer numbers fell by 9.5 per cent while student numbers rose by a staggering 32 per cent.

“As a result many institutes are struggling . . . The intention to effect such huge additional change without appropriate resourcing in an era of hugely damaging cutbacks is, at best, ill-advised.”

The TUI wishes the incoming government to introduce a revised Bill or significantly amend the proposed legislation.

TUI assistant general secretary Aidan Kenny said that for the average Organisation for Economic Co-operation and Development student the lecturer ratio was 16:1. But in Ireland this figure was 23:1.

He said in some courses students did not have access to materials or equipment to conduct experiments.