Tuam Herald tracks down lady on bike from 1987 photograph 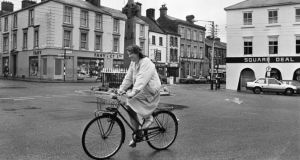 A picture taken in Tuam on the day its sugar beet factory was demolished in 1987 became a talking point. Not why it happened. Or how. But who was the woman on the bike. The jury’s in...it’s Catherine McGough. Photograph: Eddie Kelly.

Who would have thought that the most enduring element of a picture taken in Tuam on the day its sugar beet factory was demolished in 1987 would be an unidentified woman on a bike passing by chance through the shot.

But so it proved to be.

The Square Deal shop which was the source of high fashion for Tuam’s young folk back when the Sawdoctors had yet to fall for another and most likely still loved her is a pharmacy today and Fahy & Co, the Haberdashers, is now Eason’s the bookshop.

Even the railed-off High Cross in the centre of the town - and the picture - has been given shelter in a nearby church to protect it from the elements.

But the woman in the picture is still on the bike, albeit a new one.

The photograph resurfaced at the end of last month when it appeared in the Times We Lived In section of this newspaper’s magazine.

Its presence on these pages prompted the Tuam Herald to try and track down the woman at the centre of the 1987 shot by posting the image on Facebook.

The founder of Facebook Mark Zuckerberg was just three years old when the picture was taken but the story became a “huge hit” on his most social of networks, according to the newspaper.

Readers lined up to identify the woman as Catherine McGough.

She lives in the only thatched home left in the town and when she was tracked down she revealed the picture has actually been used on three separate occasions by The Irish Times. (Or, four if you count this.)

First, it was used to illustrate a story about the demolition of the Irish Sugar factory in the town and subsequently to accompany a piece about the changing face of Ireland. Most recently the focus was on the actual picture.

She recalls the exact moment the picture was taken.

“I was cycling up to St Jarlath’s Credit Union. I can’t remember whether I was going up to lodge money or take it out. I saw the photographer standing near the Imperial Hotel at The Square. But I just assumed he was taking a picture of the Town Cross which was there at the time.”

So she kept on pedalling and knew nothing about being in the frame until the next day when the owner of a local shop made her aware of her moment in the spotlight.

Fast forward 28-years and much the same thing happened except this time it was a local publican who alerted her to her presence in The IrishTimes, as she only buys this paper “from time to time”.

“It was a fine day , it was summer at any rate, but I think there must have been a hint of rain in the air too as I was wearing my rain jacket,” she recalls.

“And I have my purse in the basket of the bike. I don’t think I’d be able to do that today. Someone might rob it.”

As she cycled through the square there was no traffic to impede her progress. “All the shops were closed as it was a Monday and that was the day they all shut,” she says. “It’s a different world now and they are open seven days a week. And as for the traffic.

“The cars don’t give you very much space, that’s for sure.”

She has managed to get hold of a print of the original picture. But did she get it for nothing? “Ah no, I had to buy it.”