Traffic diverted as fire breaks out at bicycle shop in Bray 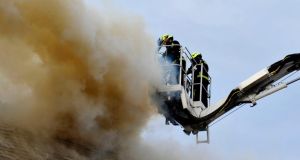 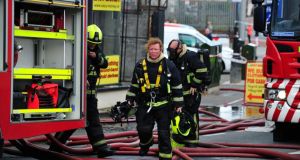 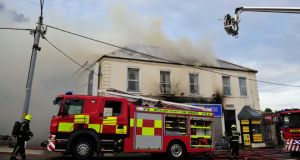 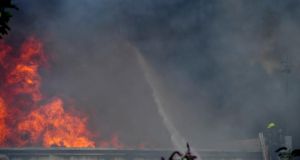 A close-up of the blaze at the Everest Centre in Castle Street, Bray, Co Wicklow. Photograph: Aidan Crawley/The Irish Times

An industrial fire broke out at Everest Cycles in Bray, Co Wicklow at around 5.30pm this evening.

The fire broke out on Castle Street, an area just over the Dargle Bridge, near to Supervalu. Four units of Wicklow Fire Brigade fought the blaze.

The cause of the fire is not yet known and no injuries were reported.

The fire sent dense black smoke up to 150ft into the air, and began just 300 yards from where two bray firemen died fighting a fire in September 2007.

Motorists had to avoid Bray, as Castle Street (Main Street) was closed and AA Roadwatch said all services in the area were diverted via Dargle Road in both directions.

Separately, there was a gorse fire on Bray head, with reports of smoke blowing as far as Killiney and Dalkey in South Dublin.

As a result, Dart services were operating to Bray only due to the fires adjacent to the line.

Commuters were being advised there were severe delays and motorists were advised to avoid the street as it was closed.

Commuters also face delays on their approach to the town from the N11.