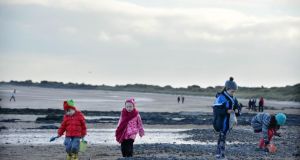 Cotton bud sticks and baby wipes are still among the top ten marine polluters found during coastal clean-ups, a marine litter conference hosted by An Taisce has heard.

Some 33,442 items of litter were removed from 128km of Irish coastline by thousands of volunteers during An Taisce’s recent “Big Beach Clean” weekend, the conference heard.

Plastic bottles and aluminium cans, cigarette butts, fishing litter such as ropes and nets and “sewage-related” litter such as cotton bud sticks are among the main items collected, an Taisce’s coastal programmes manager Annabel FitzGerald told the “Clean Coasts” symposium today in Dublin.

Some 423 clean coast groups are currently participating in An Taisce’s programme which aims to promote the values of a “two minute beach clean”.

A number of “ocean hero” groups and individuals were presented with awards by the non-governmental organisation at the event.

School of the year award went to Poulfur National School near Fethard-on-Sea in Wexford, where some 75 pupils participated in a three-day coastal education and clean-up event in May.

A clean-up in Drumcliffe Bay near Coolbeg in Co Sligo last March, involving over 50 volunteers from Lissadell Coastscare and Drumcliffe/Rathcormac Tidy Towns won “clean-up” of the year. Local Co Sligo businesses provided refreshments during the day, and among items retrieved were over 300 old tyres dumped on the shoreline.

Newcomer of the year award was presented to the Burrenbeo Trust Conservation Volunteers, who joined the Clean Coasts programme in February of this year.

Volunteer of the year award was presented to Dan Clabby of Galway, who is involved with both Clean Coasts and the Conservation Volunteers Galway group,while the Mara Beo Dingle Oceanworld aquarium in Co Kerry was awarded business of the year.

Person of the year award was given to Ms May Burns of the Mullaghmore Active Group in Co Sligo, while Ms Margaret Browne of Sandycove Coastcare Group in south Dublin was recognised for her long term contribution to the Clean Coasts project.

Wexford Sub Aqua Club was presented with “Group of the year” by An Taisce.