The Question: Why are our 15-year-old students so swotty? 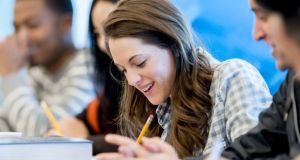 We are notoriously fond of seeing our achievements up in lights on the global stage.

So, one might have expected a bigger fuss made about the impressive performance of Ireland’s 15-year-old students in the latest Programme for International Student Assessment (Pisa) results, published on Tuesday.

The educational tests measure secondary school students around the world in reading, maths and science, and take place every three years, under the auspices of the Organisation for Economic Co-operation and Development (OECD).

In 2015, some 540,000 students in 72 countries or regions took the computerised tests, and Ireland did very well – scoring particularly well in reading, where it ranked third among OECD countries and fifth of all the countries.

Ireland is one of only four non-Asian countries – along with Finland, Estonia and Canada – to get into any of the top five rankings across all three subjects.

But what is the key element that keeps the likes of Singapore, Hong Kong, Macao, Taiwan, Japan, China and South Korea at the top of the leaderboard?

While some of our underperforming European neighbours closely examine the pedagogical best practices that leads to such results, perhaps a more salient factor, and one that is incredibly hard to mimic, is educational culture and attitudes.

As the Economist put it in a report on the Pisa results, “some critics add there is little useful to learn from the results, since it is culture and parents that lead to swots. . . Yong Zhao of the University of Kansas wrote that the right response from tests that show spectacular scores in East Asia might as well be for others to start using chopsticks”.

Our teachers may not be among the top earners among OECD countries, and our class sizes don’t match the small teacher-pupil ratios of Estonia, (one teacher for every 12 students!), but the importance of education is a deeply ingrained part of Irish culture, and surely constitutes a big reason for the continued good performance of Ireland’s 15-year-old students.

To match the Government’s ambitious plan to make the Irish education the best in Europe by 2026, considerable investment will be required – and class sizes will have to shrink sharply – but we will at least be inclined to embrace the opportunity to learn.