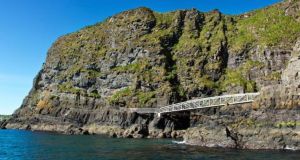 The Gobbins cliff path in Islandmagee, Co Antrim, is expected to draw about 50,000 people to the site each year.

The Gobbins coastal cliff path in Co Antrim has been restored and reopened to the public following a £7.5 million (€10.6m) investment.

The brainchild of Irish engineer Berkeley Dean Wise first opened in 1902 but had been closed for more than six decades after falling into disrepair.

Now tourism chiefs behind the new paths and bridges in Islandmagee are confident it will become one of the North’s most popular visitor attractions once again.

On Wednesday, Mid and East Antrim Borough Council members welcomed thrill-seekers keen to discover the beauty, seabirds and other wildlife of the Antrim coast and indulge in an exhilarating walk.

Among the first people to complete a guided walk of The Gobbins on Wednesday was East Antrim MP Sammy Wilson and his recent Stormont replacement, DUP colleague, Gordon Lyons.

Also on one of the tours, which leave hourly from 10am-3pm, was Whitehead resident Dave Hope.

“I was really looking forward to seeing the new path opened and delighted that it has been restored,” Mr Hope said.

“I am from the local area, so I have known about The Gobbins for a very long time and its connection to the railways.

“Until you undertake the walk, you can’t appreciate the phenomenal feat of engineering it has been and was back in 1902.

“I highly recommend it to anyone. It was an amazing experience, one I have waited years to do and it certainly didn’t disappoint. I will be back.”

The Gobbins is expected to draw about 50,000 people to the site each year.

In addition to the outdoor paths there is also a visitor centre, cafe and shop.

The Special European Union Programmes Body provided more than half of the £7.5 million cost of the project while the remainder was funded by what was then Larne Borough Council and also the Ulster Garden Villages organisation.

Mayor of Mid and East Antrim Borough, Cllr Billy Ashe said it was an exciting time for the people of Islandmagee and beyond.

“It is with great pride and excitement that we open the doors of The Gobbins and share its majestic story with a new generation,” he said.

The Gobbins cliff path requires a reasonable level of fitness and there is also a height restriction (minimum 1.2m/4ft).