The dancing dead: Zombies take on goths in Dublin

Streets fill with blood, gore and fangs at the Bram Stoker festival dance-off

Dancers in costume took part in a 'Goths v Zombies Dance-off' in Dublin city centre as part of the Bram Stoker Festival. 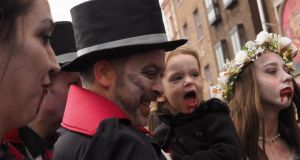 Vampires, zombies and all things gory joined shoppers on the streets of Dublin today.

Hundreds of people were in costume to kick off the second annual Bram Stoker Festival in Dublin today.

Goths versus zombies dance-off saw two bloodied and dressed up groups battling it out at the junction of Grafton Street and St Stephen’s Green this afternoon.

Alice and Larry Gorman of Co Kildare, a healthcare worker and a retiree respectively, came out specially to watch the dance-off after hearing it advertised on radio.

“It’s more than just a parade,” Alice said. “Plus the costumes will be nice.”

Mandy McCall, from Co Wicklow, took part in the dance-off with her husband Will and their four children. All the family were complete with fake blood and handmade fangs.

“It’s good fun, and Bram Stoker was from Dublin so we’re taking Halloween back for the Irish,” Mandy said. “It’s not just about trick-or-treating.”

Mandy made her family’s six sets of costumes from secondhand-store finds and created Victorian frocks, tuxes and top hats over five weeks.

“Last year we came for the festival dressed in costumes we bought from shops, and we were cold,” she said.

“So this year I decided to get real clothes and alter them.”

Another highlight of the Bram Stoker festival is the much-hyped exhibition “Blood” at Trinity College Dublin’s Science Gallery.

Featuring a blood type testing station, giant screens displaying the pulsating fingerprints of gallery visitors, and videos of performance art involving lots of blood, the exhibition sought to explore “the mythical, cultural and medical aspects of this unique connective tissue.”

The gallery entrance bore a stern warning, “Not for the faint-hearted.”

Bryan Then, a post-graduate computer science student from Malaysia, was queuing up to find out whether his blood type was A+ or A-.

“It’s a cool exhibition,” he said. “I’m not squeamish about blood. And you wouldn’t be here if you were.”

Tucked in a dark corner on the upper floor of the Science Gallery was a video screening of “138th action,” a 2013 action performance item by German contemporary artist Hermann Nitsch, which showed a cow’s carcass disembowelled by performers in white frocks that gradually got stained bright red.

Samantha Hess, a New York University film and entertainment student studying abroad in Paris, said the video was encouraging her to become a vegetarian.

“I can definitely appreciate this type of art. It’s animalistic and raw.”

The Bram Stoker Festival runs from October 24th-27th in Dublin.