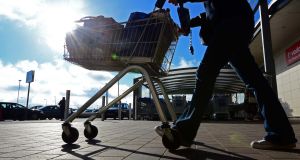 Retailer Tesco is seeking to reduce pay and conditions for about 1,000 longer serving staff as part of a move to a more “flexible “ contract of employment.

However it said that it will offer compensation to workers who are affected.

The trade union Mandate strongly criticised the development and said it represented “a crude and blatant attempt to cut wages for long-serving workers”.

Mandate assistant general secretary Gerry Light said under the proposals staff could cost the staff concerned up to €6,500 per year.

The union said the proposals could see staff losing €2.35 per hour. It said the changes would involve the loss of late night allowances, the loss of early morning allowances and the loss of a guaranteed share bonus scheme.

There is currently a two-tier system of employment contracts in place at Tesco, one negotiated in 1996 and another introduced for staff recruited after 2006.

A spokeswoman for Tesco said the 1996 contract was agreed at a time when the market and shopping habits were very different. She said at that point many stores did not open on Sunday or late at night.

She said the 1996 contract was quite inflexible and that staff generally did not work on Saturday and when they worked on Sunday they enjoyed a double time premium payment.

She said there was also a guarantee of overtime regardless of the requirements of the store.

“Our customer shopping habits are changing; more customers are shopping online, at weekends and at different times of the day and our customer service needs to be able to meet these needs. Our pre-1996 contract doesn’t meet the needs of today’s customers and was agreed 20 years ago at a time when stores didn’t open Sundays or late nights. As a result we have too many colleagues rostered during our quietest days instead of our busiest; and guaranteed overtime which doesn’t take account of the needs of each store or give colleagues an equal opportunity to work overtime when it arises. “

“To unlock this inflexibility in our business so that we can reinvest our resources in having more colleagues on the shop floor at our busiest times, we propose to move all pre-1996 colleagues onto our modern contract which was agreed in 2006 with the Trade Unions as part of our collective agreement.”

Tesco said the proposed move would affect about six per cent of staff and that the terms of compensation would be finalised over the coming weeks.

“ Our objective is to improve customer service; this is not about job losses as we have a job for everybody. We briefed colleagues on these proposed changes on Monday and hope to commence discussions with trade unions immediately.”

Mandate expressed concern that the new proposals could force longer-serving staff to leave the company.

Mr Light said Mandata members were absolutely determined that no changes would be put in place without their agreement.

Mandate contended that profits generated in Ireland, where it has a 24 per cent share of the retail grocery market, had been “hovered out of Ireland” to offset corporate losses in Tesco’s global business.

The company reported an annual loss of £6.4 billion in April, one of the largest in British corporate history.

“This is not a struggling company. It is a highly profitable retailer that has one quarter of the entire grocery market in the Republic of Ireland. The company refuses to release their profits but we estimate them to be in the region of €250-300 million per year.”

“Tesco are saying they made a loss last year when in reality the company made bad investment in the United States, bad investments in the Middle East and they were caught overvaluing properties and mismanaging their accounts, so much so that shareholders are now suing the company for millions.

Mr Light said it was disingenuous in the extreme to be using bad investments and inappropriate accountancy practices in London to justify cutting workers’ wages in Ireland.