Terry Wogan laced intimacy with a sense of the absurd 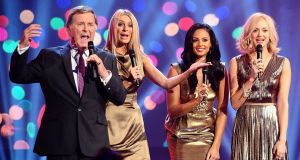 Terry Wogan with (left to right) Tess Daly, Alesha Dixon and Fearne Cotton during the BBC Children In Need Appeal of 2011. Photograph: PA

Usually, the gently ironic phrase “national treasure” is seen as quintessentially British. In the case of Terry Wogan, though, an exception can be made for a much-loved Irish broadcaster who was also an institution in his adopted home.

Terry Wogan’s TV heyday in the 1970s and 1980s was the high-water mark of popular British television – of Parkinson, The Morecambe & Wise Show and Fawlty Towers. Audiences for his game show Blankety Blank topped 20 million, an unheard-of figure nowadays.

The show was as inane as anything you’ll see on television now, but Wogan had the remarkable ability to make the audience feel that they were being let in on the joke. That era in broadcasting history is now overshadowed by the abuse scandals that have come to light around Jimmy Savile and other stars

The period of Wogan’s greatest fame was from 1985 to 1992, when his early- evening TV chat show – simply titled Wogan – ran three times a week to huge audiences. At only 35 minutes long, the tightly formatted programme did not allow much space for Wogan to show his improvisational, off-the-cuff skills, and is now largely remembered for the car-crash moments that inevitably occurred in such a heavy weekly schedule.

Television brought celebrity, wealth and status, but Wogan’s greatest talents were his warm, intimate voice and his terrific ad-libbing comedy skills. That’s why his most memorable TV role was one in which he was totally invisible; the sardonic live commentary on the absurdities of the Eurovision Song Contest, delivered from a tiny sound booth with only a bottle of wine for company, made for some of the best entertainment moments of the year.

When he finally handed the gig on to Graham Norton, his only piece of advice was “not to start drinking before song nine”. For someone who loved riffing on the absurd, Eurovision was the perfect platform.

“Every presenter and stand-up comedian in the country would have killed for the gig,” he wrote in an Irish Times review of Norton’s memoir in 2014. What he didn’t mention was that this was because he himself had demonstrated so brilliantly how it should be done.

Video: Terry Wogan signs off on his breakfast show

If you were trying to explain to a recently arrived extraterrestrial how the British see Europe, you could do worse than play some of those Eurovision programmes – the resentment, the hilarity, the increasing Euroscepticism are all there. His irritation with Baltic and Balkan voting blocs and with the inevitable nuls points for the UK entry perhaps meant that – unfortunately – he started taking the proceedings seriously (a professional hazard). But he effectively invented an entire genre of TV satirically examining itself which thrives to this day.

How important was Wogan’s nationality to his success? The neutral, difficult-to- place middle-class Irish accent allowed him to avoid some of the pitfalls faced by his British peers. And it may also have given him a little more leeway to stretch the rules a bit further than might otherwise have been possible.

His remarkable gift of the gab places him in a long tradition of Irish adventurers who charmed and talked their way to success in London. And his taste and talent for the absurd and ironic derived, as he acknowledged, from his love of Myles na gCopaleen/Flann O’Brien.

One wonders whether, if he had remained in Ireland, that puckish, anarchic spirit would have been permitted to develop in the RTÉ of the 1970s and 1980s.

Britain offered the possibility of success on a larger stage, and of greater freedom in a more tolerant, more cosmopolitan society. Wogan was hardly alone in finding that appealing. But the “bridge between Ireland and Britain”, as Enda Kenny described him, as was a two-lane highway.

The UK was hardly an alien place. As Wogan said, he grew up listening to the BBC, not RTÉ. His move from Irish to British broadcasting was seamless because the two countries shared more cultural values and assumptions than some people on this side of the Irish Sea care to acknowledge.

Throughout his career he was completely comfortable about acknowledging this, along with the fact that the UK, where he had lived most of his life, was also where he called “home”. The utter lack of sanctimony with which he described all this was a welcome and refreshing rebuke to other, more atavistic notions of Irish identity swirling around in the 1980s.

It is a shame that the unique qualities that made Wogan such a brilliant broadcaster were most clearly on display on his long-running BBC Radio 2 shows, and therefore probably were not appreciated by many people in Ireland, where British radio does not have the same reach as British television.

Radio allowed him to meander and digress as much as he wanted, to create scenarios and improvise jokes. He was a superb master, long before the advent of texting and social media, of using letters and other contributions from his loyal audience as an integral part of his material (which only added, of course, to the deep affection which that audience felt for him). His finest work as a broadcaster was done after he returned to radio in the 1990s.

Many stations yesterday played the recording of his farewell to that audience when he retired from his breakfast show in 2009. It’s a masterful performance, in the best sense of the word, heartfelt yet measured.

Arguably the relationship between a radio broadcaster and an audience is more intimate than in any other medium, and many tributes have described how listeners felt Wogan was their friend. It is no small achievement to establish such rapport and such intimacy with millions of people.