Patrick Mercer believes such a gesture would be the ‘ultimate reconciliation’ 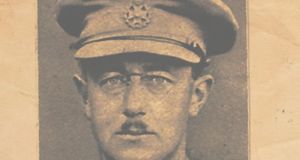 Capt Frederick Dietrichsen of the Sherwood Foresters died in an ambush on Mount Street Bridge in 1916. Photograph: Gary Quinn

A former Tory MP and commanding officer of the Sherwood Foresters has said it would be the “ultimate reconciliation” if the Taoiseach was to visit the graves of British soldiers killed in the Easter Rising.

Of the 107 British soldiers killed during the Rising, just 12 are thought to have been repatriated to Britain for burial. The rest are buried in Ireland.

Patrick Mercer said that the Easter Rising was a tragedy for all sides and the Sherwood Foresters were volunteer soldiers who enlisted for a different cause.

“They signed up to fight the Germans and found themselves fighting their own countrymen,” he said.

The Sherwood Foresters also served during the Troubles in Northern Ireland.

Mr Mercer was a former commanding officer in the 1st battalion of the Sherwood Foresters in the North. He said knowledge of the Easter Rising in Britain was “terribly neglected” as there was a perception that more important events were going on at the Western Front.

Separately, the regimental historian for the Sherwood Foresters has written to the Government suggesting there be a “plinth of reconciliation” near Mount Street Bridge to remember the battle there on April 26th, 1916 when 31 Sherwood Foresters were killed.

Clifford Housley, who has written a book about the Foresters said it would be a suitable gesture given Queen Elizabeth’s visit to the Garden of Remembrance in 2011.

A similar call was made by the granddaughters of Capt Frederick Dietrichsen who was one of the first to die in the ambush.

Nicola Wilson and Tessa Howell told Morning Ireland on RTÉ Radio 1 they would like a memorial to their grandfather and to the other soldiers who died at Mount Street Bridge.

Capt Dietrichsen was married to a Dublin woman and, by coincidence, saw his wife and his two children just before he and his regiment were cut down.

The Government has allocated a day next year for services to remember the British soldiers killed in the rebellion. A spokesman said all those who died in the Rising will be remembered.

A silver war badge awarded to one of the Sherwood Foresters will go for auction at Whyte’s in Dublin on May 9th.