Taking the slow train to Limerick

Little-used railway runs from Ballybrophy through Nenagh to Limerick city 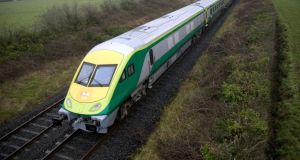 Ballybrophy-Limerick used to be part of the main route from Dublin to Limerick, but now it’s the State’s least used branch line. Just 23,000 passengers travelled it in 2014, a half a million fewer than used the longer, but now faster, route via Limerick Junction

There are just minutes to scramble from the intercity train to the branch line at Ballybrophy. Thankfully though, the two-carriage local train is waiting in a cloud of steam. Five people clamber aboard and the train leaves at a slow, laborious, almost rolling gait, the diesel engine screeching noisily as it leaves the station.

This used to be part of the main route from Dublin to Limerick, but now it’s the State’s least used branch line. Just 23,000 passengers travelled it in 2014, a half a million fewer than used the longer, but now faster, route via Limerick junction.

The slower pace doesn’t seem to bother the passengers. Deirdre McMahon settles into a seat with a table and takes out her laptop. “I use this line quite regularly,” she says. “I call it the ‘time out’ line because it’s more relaxed.”

Fiona Garvey, who is going to Roscrea, is travelling home from Barcelona where she lives, for a family funeral. “It’s a very long journey,” she says.

Also on board is Dr John Byrne a lecturer in information technology. Dr Byrne began his trip in Dublin on the 46A bus on the Stillorgan dual carriageway and is being collected by his wife in Roscrea, before travelling by car to Birr, Co Offaly. The trip was fine, he says, but adds that the online fare had risen from €9.99 to €15 by the time he booked. He wouldn’t class himself as a regular user of the train, he says with a smile.

Pensioner Martin Dunne is going as far Birdhill to pick up a camper van. “I’d very seldom use the train,” he says.

Outside is one of the first severe frosts of the winter but the train is luxuriously warm. A substantial Georgian farmhouse surrounded by trees paints a pastoral picture as the train rounds a bend.

At Roscrea, Ms Garvey and Dr Byrne leave the train. Nobody gets on. There are now two people on the train with me. Before Cloughjordan, Iarnród Éireann earth-movers can be seen working on either side of the line.

At the station, pensioner Vicky Ryan, a regular user, gets on. She says there is a great sense of community among the rail users, particularly when people from the Cloughjordan eco village are travelling. Also getting on are Melissa Harty and her son Danny, who “use the train a lot” to go into Nenagh.

At Nenagh, pensioner Barbara Walshe boards. She got a lift to the station and will be collected in Limerick by her daughter, a journey she would do “once or twice a month”.

At Birdhill, four Dubliners, Margaret and Arthur Moore and Liam and Pauline Nolan, board the train. They have been staying in Killaloe/Ballina and are travelling with the aid of the free travel pass.

Their journey home will involve a taxi from Killaloe to Birdhill, a change of trains at Limerick and another change at Limerick Junction, a Luas trip in Dublin and a Dart or a bus out to Clontarf.

At Castleconnell, the last stop before Limerick, Shamim Bhuiyan, who runs “a small take-away” in Castleconnell, and pensioners John Wrixon and Charlie Horan also get on. Mr Wrixon will be shopping in Limerick but Mr Horan is changing trains for Ennis, Co Clare, where he will get a bus – “the train takes too long” – to Galway to meet his sister.

As we arrive in Limerick, there are 13 passengers, including the ticket collector.