Stormont in jeopardy if talks on IRA and welfare fail, says Villiers 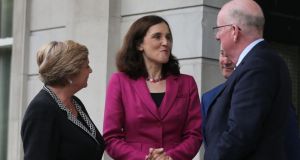 The future of Stormont is “in jeopardy” if welfare reform and the fallout from the murder of Belfast republican Kevin McGuigan can not be resolved, Northern Secretary Theresa Villiers has said.

Ms Villiers expressed her concern in a statement to the House of Commons on Tuesday just hours before she and Minister for Foreign Affairs Charlie Flanagan initiate another period of all-party talks aimed at safeguarding the Northern Executive and Assembly.

First Minister Peter Robinson is boycotting Northern Executive meetings pending the outcome of these talks and has also threatened to collapse Stormont if it is clear the talks will fail.

Mr Robinson said the murder last month of Mr McGuigan and the police assessment that the IRA still exists and some IRA members were involved in the killing, albeit without the sanction of its leadership, had created a “watershed” in Northern Ireland politics.

Ms Villiers also said the refusal of Sinn Féin and the SDLP to endorse British government welfare reform and the consequent failure to implement the Stormont House Agreement of last Christmas had created a budget shortfall which could make Stormont unworkable in the coming weeks.

‘Running out of money’

She repeated her warning that Westminster would take over responsibility for welfare if the Executive did not sign up to the British welfare proposals. She said there was a “real prospect that the Executive will start running out of money with resulting damage to frontline public services such as hospitals, schools and policing”.

“In those circumstances the government cannot stand by and let this situation drag on indefinitely with Stormont less and less able to deliver key public services. As a last resort, we would be prepared to legislate here at Westminster for welfare reform,” she said. “But I must emphasise that we would do so reluctantly and only after we had exhausted all the other realistic alternatives.”

In relation to the murder of Mr McGuigan, the Northern Secretary said the British government would not compromise on the rule of law. “Only parties committed to exclusively democratic and peaceful means can or should be eligible to participate in Northern Ireland’s political institutions,” she said.

Ms Villliers made clear she accepted that Sinn Féin was signed up to peace and democracy. “I believe that all the parties in the Northern Ireland Executive are committed to those principles,” she told MPs.

She added: “The future of these institutions is in jeopardy if the two very serious matters I have outlined today are not resolved.”

Ms Villiers said “a way through can be found” and that she would strive for this as the talks process began.

“Northern Ireland political leaders have shown remarkable courage over the past twenty years and have achieved great things working together. We need to show the same spirit over the next few short weeks.”