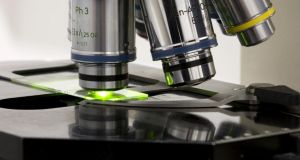 The trials involve injecting adult stem cells derived from adipose tissue or fat into cartilage to stimulate its regeneration.

Osteoarthritis affects some 70 million people across the EU, and current treatment is limited to surgery or pain management.

Some 400,000 people in Ireland are affected by this most common form of human arthritis, which is characterised by the often very painful degeneration of cartilage in joints.


Successful trial
NUI Galway (NUIG) scientists, who are part of a €9 million EU-funded project, have just finished the successful phase one clinical trial.

“From the clinical trials conducted so far, we have seen the first signs of finding a cure for this truly incapacitating disease which affects so many,” Prof Barry said. “Using the patient’s own stem cells we have been able to treat their diseased joints, and relieve their suffering and burden of pain.

“Whilst we are still in the early stages of clinical trials, the results so far are extremely positive – such that the use of stem cell therapy for osteoarthritis could become a reality for patients within the next five years,” he said.


Adipose stem cells
Stem cells can be harvested in large quantities from adipose tissue or fat, with minimally invasive surgery. These cells have emerged in recent years as a good alternative to stem cells derived from bone marrow, Prof Barry notes.

Prof Barry and his team recently secured Irish Medicines Board licensing to set up the first manufacturing facility of stem cells for human use in Ireland – one of less than half a dozen such centres in Europe.

It aims to culture adult stem cells to tackle conditions such as arthritis, heart disease, diabetes and associated conditions.

Remedi is a Science Foundation Ireland-funded research cluster, led by NUIG with partners at University College Cork and NUI Maynooth.