As four factions fail to form a coalition, voters wonder if big picture is ignored 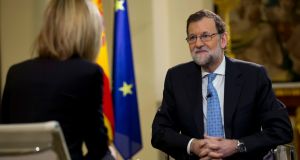 Spain’s acting prime minister Mariano Rajoy: He rejected King Felipe’s invitation to try to form a government, on the grounds that he knew he would lose the congressional confidence vote. Photograph: Diego Crespo/Prime minister’s office/

Asunción Martín’s trinkets and ornaments shop is tucked away in one of the quieter streets in Madrid’s Salamanca district, far from the hustle and bustle of Congress, where Spain’s political parties are still trying to form a government after December’s general election.

“I’m not happy at all with what has happened,” she says, as she smokes a cigarette outside the shop.

“Two months have passed since the elections and we still don’t have a government – we need this to be resolved as soon as possible.”

The governing conservative Popular Party (PP) won the election, but its majority in the 350-seat congress was wiped out, in great part due to the arrival of two new forces: the anti-austerity Podemos and the liberal Ciudadanos. The other traditional power, the Socialists, came second, but with their worst performance of the modern era.

With four parties now dominating Spain’s political landscape and breaking up the PP-Socialist duopoly of the last three decades, a coalition or at least governing pact will be needed in order to end the limbo.

“A coalition government, with several parties, might be the best thing for us,” says Martín. “In other European countries that seems to work and I wouldn’t mind it.”

With Spain’s politicians not used to making such pacts at a national level, the last two months have been tense, often bad-tempered and frequently confusing as parties have jockeyed for position to form part of a new government without being seen to cede too much ground. Acting prime minister Mariano Rajoy found himself so isolated that he rejected King Felipe’s invitation to try to form a government, on the grounds that he knew he would lose the congressional confidence vote.

“Everyone is talking about this at the moment,” says José María Marco, a petrol station attendant who says his customers discuss little else when filling up their cars. “Everyone has a different opinion, but the overall feeling seems to be anger. People feel let down by how all this has turned out.”

If the Socialists fail in their upcoming attempt to form a government, as many expect them to, and no other candidate can break the impasse, new elections will be held, but not until late June. Last week, Rajoy was caught on camera telling British prime minister David Cameron that repeating the election was now the most likely outcome.

On Tuesday, the pressure was cranked up even further as a major business association warned that the main parties were offering an “unedifying spectacle”.

Marco, who didn’t vote in December, is convinced Spain is heading back to the ballot box: “In the next elections, after seeing this situation and all the problems it’s causing, I might have to vote.” While Marco says he doesn’t know how he would cast his vote, others who took part in the December election are rethinking their allegiances.

“Now we’ve seen that Ciudadanos have no chance of winning, I’d vote for the left – that is, the Socialists,” she says. “Voting for Ciudadanos is a waste of my vote.”

She rules out Podemos, which has 69 seats, because its leader, Pablo Iglesias, reminds her too much of South American politicians such as Evo Morales and Hugo Chávez.

Rafael González, an audiovisual expert, had no such qualms when he voted for Podemos in December.

But the cynical way in which he believes the new force has been negotiating with other parties in recent weeks has left him unimpressed.

“They haven’t behaved the way I’d hoped,” he says. “I voted for Podemos with the hope that they would then reach out to other parties. And as far as I can see, they’re not doing that.”

If fresh elections were held, he plans to vote for the United Left, a communist-led coalition with just two parliamentary seats, which he has voted for in the past.

“Instead of casting a so-called useful vote, next time I’ll vote in a way which leaves me comfortable with myself,” he says.

As Spain’s politicians discuss everything from the country’s economic model and constitutional reform to how to deal with Catalan separatism, a common criticism is that they are not looking at the broader picture.

“The political parties are just thinking about their own interests and they’re not thinking about the Spanish people,” says Alicia Rodríguez, who runs a newspaper kiosk near the bullring in Madrid. “They’re just looking at how much advantage they can get over each other.”

The much-touted new era of Spanish politics is not impressing Rodríguez so far.

“I think this situation is worse than before,” she says. “If there are neighbours who can’t agree among themselves, imagine what it’s like with all these political parties – it’s impossible for them to agree. It’s like a madhouse.”

Asunción Martín says that the uncertainty is affecting footfall in her trinkets store.

“January and February have been very bad [for business],” she says. “People are on tenterhooks, waiting to see what will happen. People are frightened, they’re saying, ‘I’m going to wait’ – but who knows what they’re waiting for?”