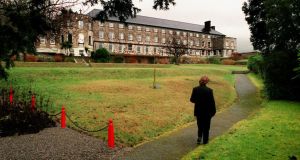 St Angela’s College, Sligo: there are almost 60 full-time academic staff at the college, most of them female, and all currently hold the position of lecturer. Photograph: Pat Langan

Academic staff at St Angela’s College in Sligo have expressed alarm at a plan to demote their posts from university lecturer to teacher as part of full integration with NUI Galway (NUIG). There are almost 60 full-time academic staff at the college, most of them female, and all currently hold the position of lecturer.

NUIG has accredited courses since 2006 at St Angela’s College, which provides third-level education in nursing, education and home economics. Under full integration, St Angela’s will merge with NUIG from next September.

The academic staff have been informed by management that an NUIG academic will meet them in separate groups early next week to brief them on qualifications for positions which they already hold. Staff will be asked to fulfil criteria which have not yet been specified to apply for a “small number” of lecturer posts.

An extraordinary meeting of the Teachers Union of Ireland (TUI) branch at St Angela’s yesterday discussed serious concerns about the impact of the change in terms and conditions, which could restrict research and promotional opportunities and could have an impact on decision-making and curriculum development.

Staff have pointed out that the changes come just weeks after recent Equality Tribunal and Higher Education Authority reports highlighting gender imbalance at NUIG. The staff feel “particularly vulnerable”, according to sources, as many of whom have not had written contracts due to an internal dispute at St Angela’s dating back a number of years.

The staff have been told that their pay will not be cut, but they say their unions have not been permitted to participate with college management in the incorporation negotiations with NUIG. The heads of agreement are due to be signed off by the end of next month. Staff are understood to have made several requests to have the issue be referred to the Labour Relations Commission.

NUIG says it has two parallel grades of academic contract in its current structure – university teacher and lecturer. “The salary scales and promotion tracks of both grades are identical,” it said, with lecturers carrying out a mixture of research and teaching while teachers focused primarily on teaching. It said it was “clear that the most appropriate contract is that of university teacher”, but this did not involve a demotion.

NUIG said that “at a future stage... full support will be provided for St Angela’s staff wishing to pursue research activity” and such support is already in place for NUIG university teachers.

“The terms and conditions, including pay, of all staff are governed by EU Transfer of Undertakings Regulations (TUPE) and, as public servants, by public service agreements such as Croke Park and Haddington Road,” her statement said.