Discovery made by walkers at Forlorn Point, Kilmore Quay, on Tuesday afternoon 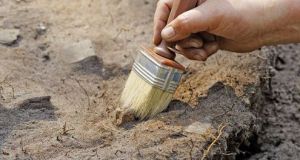 The scene was preserved and assistance was sought from the office of the State Pathologist after skeletal remains were discovered at a beach in Wexford. A forensic anthropologist subsequently attended the beach. File photograph: iStockPhoto

Skeletal remains discovered at a beach in Wexford are believed to date to the Iron Age.

Gardaí confirmed the discovery of what proved to be a complete human skeleton, made by people out walking at Forlorn Point, Kilmore Quay, at about 4.45pm on Tuesday.

The scene was preserved and assistance was sought from the office of the State Pathologist. A forensic anthropologist subsequently attended the beach to inspect the remains.

It was established that the bones were historical, and possibly dating to the Iron Age, between about 500BC and 400AD. They will be taken into the custody of the National Museum, as is standard procedure in such cases.

It is unclear what proportion of the skeleton was recovered.

According to the website Irish Archaeology, the Iron Age is a “somewhat enigmatic” period in Ireland’s prehistory.

Cremation was the normal method of burial. The site counts a number of large tribal sites from the period as locations at Navan Fort, Co Armagh; Dun Ailinne, Co Kildare and Croghaun, Co Roscommon.

The period is also associated with the arrival of the Celts in Ireland.

Boy who was knocked off scooter while playing settles action for €71,000 17:28
Public health doctors overwhelmingly back strike action over pay and contracts 17:19
Hotels, retail, hairdressers, gyms, churches to open next Tuesday, followed by restaurants and gastropubs on Friday 17:15
Black Friday ‘represents the worst of human nature’ says Waterford retailer 17:12
Exiting Level 5: What will reopen and when will it happen? 17:11