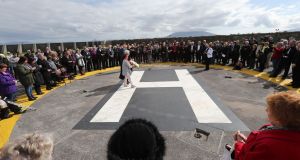 Vera Cusack and Bernie Naughton from the Rosscommon Solstice Choir lay a wreath for the crew of the Irish Coast Guard helicopter crash Rescue 116 at the helipad in Blacksod Harbour. File photograph: Niall Carson/PA Wire

The sister of Rescue 116 crew member Ciaran Smith has said she still holds out hope his body will be found.

Orla Smith said “for as long as I live I will have hope that we will get his body home”. Mr Smith (38) and his colleagues Capt Dara Fitzpatrick (45), Mark Duffy (51) and Paul Ormsby (53), died after their Sikorsky S-92 helicopter crashed at Blackrock Island, 13km west of north Co Mayo, on March 14th.

His body and that of winch operator Mr Ormsby have not been recovered despite extensive air, sea and shore searches.

“Do I think we will find him, I’m really not sure. There is always going to be a little bit of hope and I suppose hope is the only thing that keeps you going sometimes is that we might find him, we might get him and we might be able to say our goodbyes,” Ms Smith told RTÉ’s Marian Finucane show on Saturday.

“He is in no way not with us. He is with us, he is all around us, he is in his three girls most definitely and that gives us such strength and keeps us going. There is still a motivation in me to get his body and put him in a place that we can visit and say our thoughts . . . As the weeks go on the hope does fade a little bit but I think for as long as I live I will have hope that we will get his body home.”

Ms Smith said when she initially heard the helicopter crashed she believed her brother would survive.

“My thought was my brother will survive this. There’s no way; if anyone’s going to survive something like this, it’s going to be Ciaran Smith and was quite convinced in that for a few hours at least,” she said.

“As the day went on I realised he’d been in the water for quite some time and the likelihood is that no, in fact not even my big brother was going to get through this.”

Hit by a train

“That’s when the train hits and that train, it’s almost like it pushes you, all four families, pushes us down that track, in our car into debris, into obstacles the whole way. That’s what it was like,” Ms Fitzpatrick said. “Your whole life is just completely changed in that instance and you’re just smashed by this train.”

Ms Fitzpatrick added if she could spend five minutes with her sister again she would tell her “we love her” and that her three-year-old son Fionn was being raised as she would have wanted.

Both women said they would have preferred if the transcript of the final moments of the Rescue 116 crew had not been made public. A number of newspapers featured the transcript on their front pages last April, including Mark Duffy’s final words “we’re gone”.

“I wish that those words had not been published in the papers,” Ms Fitzpatrick said. “We’re hearing their death and it’s just wrong, it’s private, it’s personal. None of us wanted to hear that, we certainly didn’t want it published . . . It was like being hit by another train from another direction.”

Ms Smith said: “It was very difficult to walk down the street the following day and see Mark Duffy’s words in particular on the front pages of the newspaper.”