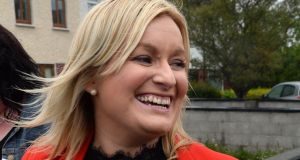 Sinn Féin has asked councillor Noeleen Reilly to return her seat to the party after she resigned on Monday over a long-running and bitter dispute in her constituency.

Ms Reilly was suspended by Sinn Féin at the weekend over the ongoing row between her and Sinn Féin TD Dessie Ellis in Dublin North-West.

In a statement on Monday, Ms Reilly said that decision had left her with “very little choice” but to resign.

She added: “I could not remain in the party that and defend myself or allow myself to be treated in this way.”

Ms Reilly has made a series of allegations of “physical assaults, verbal abuse, total isolation, smear campaigns” by members of Sinn Féin. The allegation concerning physical assault has not been directed at Mr Ellis.

She insisted she raised her concerns within the party from as far back as February 2014 and had sought repeatedly to have certain issues addressed.

“Every time I did so it was either ignored or an angle was found to blame me for their treatment.”

In response to her resignation, Sinn Féin said it believed Ms Reilly should give her seat on Dublin City Council back to the party.

It also defended its response to the councillor’s allegations, stressing it advised her on numerous occasions to report the matter to gardaí.

Ms Reilly was suspended by the party’s ard comhairle this weekend following an investigating into complaints made.

Speaking to The Irish Times on Monday, Mr Ellis said he would not be commenting on the allegations, insisting he had it “up to my eyes” with the dispute.

In her statement issued on Monday morning, Ms Reilly said she was “up against the wrong people and this was never a battle I was going to win.

“I was always told to keep these matters internal and I did so for four years hoping that justice would take place as some time.”

She said she will remain as a councillor in an independent capacity.