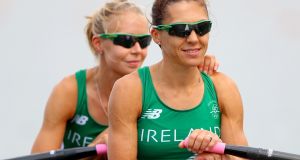 The parents of Irish Olympic rower Sinead Lynch have thanked their neighbours and friends for helping to “soften the blow’ of their daughter’s disappointment at the Rio Games.

Sinead (39) and rowing partner Claire Lambe came home in last place in Friday’s lightweight women’s double sculls final, despite expectations that they might have snatched a medal.

The Co Donegal woman’s father Michael admitted that he and his wife Theresa were disappointed for Sinead that she did not get a medal.

However, a party organised for the race by neighbours and friends at their home in Hawthorn Heights in Letterkenny helped soften the blow, he said.

Sinead’s parents opened their home to the entire town for the party .

Michael admitted: “We’re just a small bit disappointed that she didn’t get the medal. It was a wonderful feeling to see her row out there with the world’s best.

“The fact that so many are here in the house to support us has softened the blow,” he said.

Sinead’s mum Theresa echoed her husband’s sentiments, saying: “It’s just that she went up so much and you can’t help but hope and then be a wee bit disappointed. It’s just been great watching it here with our neighbours and friends.

“I would have been sad if it had been just myself and Michael, but we have such a back-up now that it’s great.”

Despite coming sixth in the race, there were huge cheers in the family’s home for Sinead’s achievement.

Neighbour Deirdre Duffy said that despite the outcome, Sinead will always be an Olympian.

“Of course we’re disappointed, but for Sinead to go to the Olympics in the first place and to fulfil that dream is just incredible.

“We can’t wait to see her again when she comes home. She’ll always be a winner in our eyes.”

Sinead’s sister Caitriona, who has competed for Ireland in the marathon at the Olympic Games, was also at the family home.

Caitriona said: “She might be disappointed now but I think when she goes away and cools down she will realise it is an achievement and she still finished sixth in the Olympics.

“To make the final was a fantastic achievement and anything she got today was a bonus and she will be very proud.”