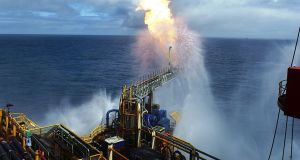 The Ocean Guardian drilling rig at the Corrib field, 80km off the Co Mayo coastline

Two final statutory authorisations relating to the pipeline and plan of development are before Minister for Energy Alex White, who is expected to permit “start-up” of the controversial €3.6 billion project very shortly.

“Shell awaits the final regulatory approval and looks forward to delivering gas and the many long-term benefits that will flow from Corrib,” the company said in a statement welcoming the EPA’s determination, confirming it was “technically ready”.

The EPA issued its revised atmospheric and marine emissions licence for the project, subject to a number of conditions.

Shell received its original integrated pollution, prevention and control (IPPC) licence from the EPA in 2007, but agreed to seek a review after it conceded to a demand by Erris fishermen that “treated produced water” from the refinery be discharged 65km out to sea at the offshore well head, rather than some 12km out, just outside the mouth of Broadhaven Bay.

An Taisce objected to the original licence on the basis the Ballinaboy gas refinery is too close to the main drinking water supply for the area at Carrowmore lake, and obtained confirmation from the Scottish EPA it would “normally recommend against” placing “major industrial facilities” at locations which “could affect public drinking water sources”.

The EPA recommended a revised licence in April this year in a preliminary decision which attracted eight objections – including one from Shell relating to certain conditions. An oral hearing was requested by local residents and others in two objections, signed by 1,164 people.

One of the two asked that the hearing be held to comply with the principles of the Aarhus Convention which Ireland only ratified in June 2012.

In a submission from 64 residents living on both sides of the Sruwadaccon estuary – through which the last section of linking pipeline would run – they described experiencing “spills, sinkholes, light and noise pollution, changes to the land and the waters and breaches of regulations” over the past decade.

“Our reports and observations have been blocked out consistently,” they wrote. “We have learned that there is no reliable system in place to react immediately and adequately when things go wrong.”

In response, the EPA said there were “no new issues raised or data provided” in the objections.

Residents maintain flaring of gas which has taken place at Ballinaboy over the past week was not authorised under the existing licence terms.

Shell E&P Ireland confirmed earlier this week that “some unplanned flaring” had taken place as “preparations for first gas continue”. It said all activities at Ballinaboy were “in accordance” with its industrial emissions licence.

The cost and time overrun since Shell acquired the project from Enterprise Energy in 2003 has been acknowledged as an additional boost to employment in north Mayo among supporters.