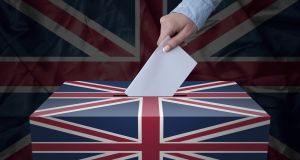 According to the data there is still a significant percentage of people in favour of Northern Ireland remaining part of the United Kingdom. Photograph: Getty Images

There has been a significant statistical increase in support for a united Ireland among people in the North, according to a new survey conducted by Ipsos Mori.

The face-to-face survey of more than 1,000 people carried out across Northern Ireland on behalf of BBC political programme The View, between August 16th and September 2nd, indicates a five-point increase in support for a United Ireland (22 per cent), from 17 per cent in 2013 . This is regarded as a significant change.

More than four out of 10 people with a Catholic background (43 per cent) would back a United Ireland, up from 35 per cent in 2013, an increase regarded as statistically significant.

When respondents from across the North were asked if the government should call a referendum on the Border, 33 per cent of people said No and 52 per cent said Yes, while 15 per cent were don’t know.

A majority of Protestants were against the idea, with 72 per cent No and 53 per cent of Catholics Yes.

According to the data there is still a significant percentage of people in favour of Northern Ireland remaining part of the United Kingdom.

From 2013 there has been a 5 per cent increase to 22 per cent among those who said the would vote to join the Republic of Ireland.

Some 83 per cent said the Brexit decision had not altered their position, while 17 per cent indicated it had changed their thinking.

Those whose views had been influenced by the EU result were slightly more likely to be female, from a Catholic background and drawn from the affluent AB social classes.