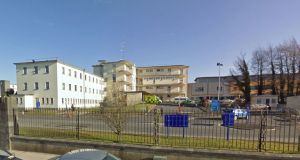 A seven-month-old girl has died in hospital after being found in an ‘unresponsive’ state in a car.

A seven-month-old child has died in hospital after being left unattended in a car for a number of hours on the hottest day of the year so far.

The child was found in an “unresponsive” state, according to gardaí, after 1pm yesterday in the village of Dundrum in west Co Tipperary.

Gardaí confirmed that they attended the scene after a 999 call was made, as did other emergency service personnel as well as a local GP.

The little girl was airlifted from the nearby Kickham’s GAA field to University Hospital Limerick in a critical condition but pronounced dead later in the afternoon.

Distraught family members were last night being comforted by relatives, friends and neighbours in west Tipperary.

The baby has been named locally as Chloe Fogarty, only child of Paul and Louise Fogarty, a young couple who live in the Tipperary town area and are originally from the parish of Golden-Kilfeacle and Tipperary town.

They are involved in local GAA and well-known throughout their home communities.

It is understood that the father went to work at a local steelworks at about 8am in Dundrum and was due to drop his daughter off at a creche but forgot to do so and the infant was left in the car.

He remembered that the little girl was in the car after 1pm but the child was unresponsive by the time he returned.

Temperatures were in the 20s in Tipperary yesterday and Met Éireann confirmed it was the hottest day in the country so far this year.

A Garda spokesman described the incident as “a personal tragedy” and a “very sensitive” case. They have been liaising with family members since the incident unfolded.

Sinn Féin councillor Martin Browne described the incident as “pure tragedy” and called on the local community to support the family during this difficult period.

Mr Browne added that Paul and Louise Fogarty had only been married in 2015 and requested that people give the family time and space to grieve.

“Our thoughts are with the two families involved,” he told Newstalk Breakfast. “They are well known and respected. I would encourage people to rally behind them.”

“It’s an awful tragedy,” former Fine Gael TD Tom Hayes, who lives in the nearby village of Golden, said.

“It’s just so sad,” Fianna Fáil county councillor from Cashel, Roger Kennedy, said. “The whole area is in shock.” He described the people involved as “a popular, well-known family” who are very involved in the community. “There is total sadness here.”

Sinn Féin councillor Martin Browne said it was “the hottest day of the year so far” in the area, which would have made conditions more difficult for the child in the car.

“They are a very nice, very respectable family and it’s just a complete tragedy,” he said. “I’m sure the whole community will rally around the family.”