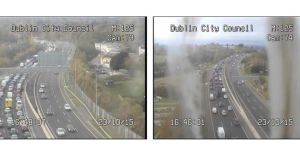 Gardaí have said traffic on the M50 is being diverted at junction 14 in Sandyford due to a crash.

Commuters in Dublin are facing more traffic disruption after to an incident on the M50.

Gardaí have said traffic on the M50 is being diverted at junction 14 in Sandyford due to a crash.

Dublin: Northbound traffic on M50 is being diverted at junction 14, Sandyford due to road traffic collision between junctions 13 & 12.

Two northbound lanes have reopened between junctions 13 (Dundrum) and 12 (Firhouse).

The incident comes after thousands of commuters were hit by a rail strike this morning .