Ruling not to extradite Bailey to face trial in France ‘scandalous’ 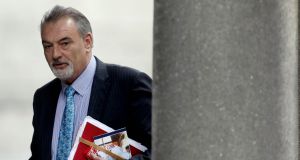 Ian Bailey: he has appealed a High Court jury’s dismissal of his claim that various gardaí conspired to frame him for the murder of Sophie Toscan du Plantier

The mother of Sophie Toscan du Plantier has said the decision by the Irish courts not to extradite Ian Bailey to face trial in France is “simply scandalous”. “I am very unhappy,” said Marguerite Bouniol.

However, relatives and friends have acknowledged that Monday’s decision was expected.

In his High Court judgment Mr Justice Hunt noted that the Supreme Court had ruled in 2012 on a French extradition request, and that it was now 21 years since Ms Toscan du Plantier was killed.

He also noted that the Director of Public Prosecutions had long ago decided there was no basis for charges against Mr Bailey.

Mr Bailey (60), of The Prairie, Liscaha, Schull, Co Cork, denies any involvement in the death of Ms Toscan du Plantier, who was found dead outside her holiday home in Schull in December 1996.

“After 20 years in vain, we are not expecting anything, anymore, from Ireland, ” said Jean Antoine Bloc, a leading member of an association supporting the Toscan du Plantier family.

Supporters have been lobbying the European Commission to put pressure on Ireland to change its legislation. Mr Bloc said: “Ireland should review its interpretation of the application of the European arrest warrant.”

A French judge will decide soon whether to try Mr Bailey in absentia, who has been formally accused of the murder in a French court. “[We are] confident that a trial will be held next year or the year after,” Mr Bloc added.

Meanwhile, the Court of Appeal will give judgment on Wednesday on Mr Bailey’s appeal over a High Court jury’s dismissal of his claim that various gardaí conspired to frame him for the 1996 west Cork murder.