Robbie the Robot to be unveiled at TCD 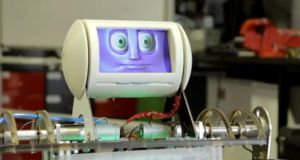 Robbie the Robot is powered by rechargeable high density lithium-polymer batteries and is controlled via an iPad control interface.

A prototype robot designed by TCD researchers and engineering students for Cork teenager Joanne O’Riordan, who was born without limbs due to a rare congenital disorder known as total amelia syndrome, will be officially unveiled today.

In April 2012, Ms O’Riordan challenged delegates at a United Nations telecommunications conference in New York to build her a robot capable of picking up objects.

She had been invited by the organisation’s International Telecommunication Union’s (ITU) to speak at its ‘Girls in ICT Day’.

TCD Engineering assistant Professor Kevin Kelly took up the challenge along with a team of engineering students and with the assistance of a donation of €50,000 from the ITU, the team built Robbie the Robot.

Robbie is a prototype humanoid robot, with a head, arms, torso and a single ‘leg’ which uses two wheels to move around.

The robot took three months to develop. When standing upright, it is 140 cm tall and weighs 40kg . A number of computers are housed in the robot’s torso which also has two arms mounted on its shoulders.

It has a single leg which can bend at the knee and ankle and instead of feet it has two wheels along with a stabiliser wheel.

It is powered by rechargeable high density lithium-polymer batteries and is controlled via an iPad control interface.

The team behind Robbie the Robot is planning to conduct more research to develop the concept to add greater capability and functionality to the concept.

The robot will be introduced this afternoon to the secretary general of the United Nations specialised agency for information and communication technologies, Dr Hamadoun I Touré in Trinity College Dublin.