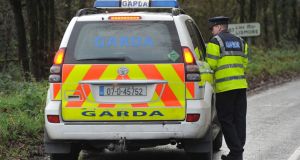 Gardaí on the Kilworth to Ballyduff Road, near Fermoy, Co Cork, near the scene of a road traffic collision in which two women died. Photograph: Daragh McSweeney/Provision

The number of deaths on the State’s roads has fallen by 18 per cent year on year, the Road Safety Authority has said. The authority, the Garda Síochána and the Department of Transport yesterday hailed the provisional figures which were revealed just as news of a double road traffic fatality near Fermoy, Co Cork, emerged.

At a briefing in Dublin, Moyagh Murdock issued a warning to people taking to the roads over the busy Christmas and new year period to follow the law and adapt to the driving conditions.

“There could be another four to six deaths before the end of the year,” she said.

Statistics published by the authority and Garda, even when adjusted to include yesterday’s deaths, show a reduction in fatalities and place the authorities well to achieve a goal of reducing annual road deaths from a rate of 42 per million people in 2014 to 25 per million by 2020.

The statistics for the year, to noon yesterday, show that 156 people have died in 149 collisions on the Republic’s roads, 35 fewer than in the same period last year. Those who died included 70 drivers, 26 passengers, 31 pedestrians, 20 motorcyclists and nine cyclists.

Despite the improvements, Ms Murdock said young drivers remained more likely to crash. Parents who allowed learner-driver children on the roads unaccompanied by a qualified driver should stop, she said.

Nineteen of the drivers who died so far this year and eight of the passengers killed were not wearing seatbelts. “Putting it bluntly,” said Ms Murdock, “if they had been wearing their seatbelts, we could see them here today.”

Minister for Transport Paschal Donohoe said progress in reducing fatalities was welcome but further improvements in driver behaviour held out the possibility that 2015 could be “the safest year on our roads since we began recording road deaths in 1959”.