Result of election to have implications for all party leaders

Analysis: Enda Kenny in race to form government and to save his leadership of party 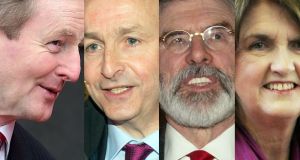 The result of the election will have implications for all party leaders but particularly for Fine Gael leader Enda Kenny (left) and Labour Party leader Joan Burton (far right). For Michael Martin (second left) the election result secures his leadership while Gerry Adams must now consider when to step aside.

As Fine Gael digests the results of general election 2016, Taoiseach Enda Kenny faces a race both to assemble a government and to save his leadership of the party.

It is a long way from where the team around Kenny expected to be today. It is understood preliminary work had taken place on the Fine Gael and Labour manifestos to ensure negotiations on a programme for government could begin quickly.

The experience of 2011 taught some in Fine Gael, in particular, that this process could take some time and rob an incoming administration of initiative.

They expected to wake up this morning, and with the wind of 60 Fine Gael TDs, 10 to 13 Labour deputies and a clutch of Independents at their back, announce they were proceeding to form a government.

How different things have turned out. Ministers and TDs are today privately admitting that, after almost 14 years, Kenny’s leadership of Fine Gael is likely to be coming to an end.

Fine Gael sources say the party rank-and-file are becoming restless with Kenny and are genuinely angry at today’s outcome.

Some Ministers acknowledge that everything must be done to provide the country with stable government - which means an arrangement with Fianna Fáil - even if that means sacrificing Kenny as leader.

Whatever about dealing with Fine Gael, it is impossible to see Fianna Fáil dealing with Kenny’s Fine Gael. Fianna Fáil deputies say they campaigned to remove Kenny from office and will not countenance putting him back in the Department of the Taoiseach.

However, many in Fine Gael believe the Taoiseach will stand and fight and say it is not in his nature to bow out.

They believe Kenny will try to hang on and his best chance of doing so is to gather a collection of minor parties and Independents to his banner.

At best, Fine Gael will get 51 or 52 seats. If Kenny is to save himself he must reach out to others and try to assemble a minority government of 60 or more deputies that could then rely on external Fianna Fáil support.

There is another element of the minority government approach that could shore up Kenny. In such a government, he will have around 30 ministerial positions to give out.

A “parity of esteem” coalition with Fianna Fáil halves that figure, effectively giving more incentive to disgruntled TDs to oust him.

Just months ago, people were selling their shares in Michéal Martin and his approach to coalition - insisting he would not do business with Fine Gael or Fianna Fáil - was ridiculed.

Yet it is Martin who is the winner today, and the questions about his leadership that lingered throughout the past five years have been dispelled.

Should he choose the path of coalition with Fine Gael - an option that many in his party are vehemently opposed to - it cannot be with Kenny.

It is ironic that Martin could cause Kenny’s demise.

The Labour Party could be left with as few as six seats and while Joan Burton is likely to remain leader until all her candidates have seen their counts through, her leadership is surely now at an end.

For Labour, it is a matter of waiting to see who emerges from the wreckage of today before any thoughts turn to future leaders. But the party’s problems run deeper than who will lead it in the 32nd Dáil. It is no exaggeration to say it faces an existential crisis, having now become a niche, liberal, middle class party.

Brendan Howlin and Eamon Gilmore today said the party can be rebuilt, but it first must decide for what purpose - and to represent whom - it must rebuild.

Sinn Féin will gain seats today but, on an expected 15 to 17 per cent of the vote, will not post the gains it threatened to just 18 months ago.

It is widely expected Gerry Adams will step down sometime in the next Dáil and some of his broadcast interviews, when his loose grasp of economic policy came back to haunt him, underline that Adams must move on if the party is to grow.

There is another reality all parties must now face.

In such a fragmented political landscape, it is no longer acceptable to rule out dealing with Sinn Féin in advance of future elections.

Government will pass the party by this time but it cannot be ignored as a player in future. Adams’ departure will help remove the toxicity from the party.

While that will not determine when Adams stands aside, it is likely to have crossed the minds of others in the party.